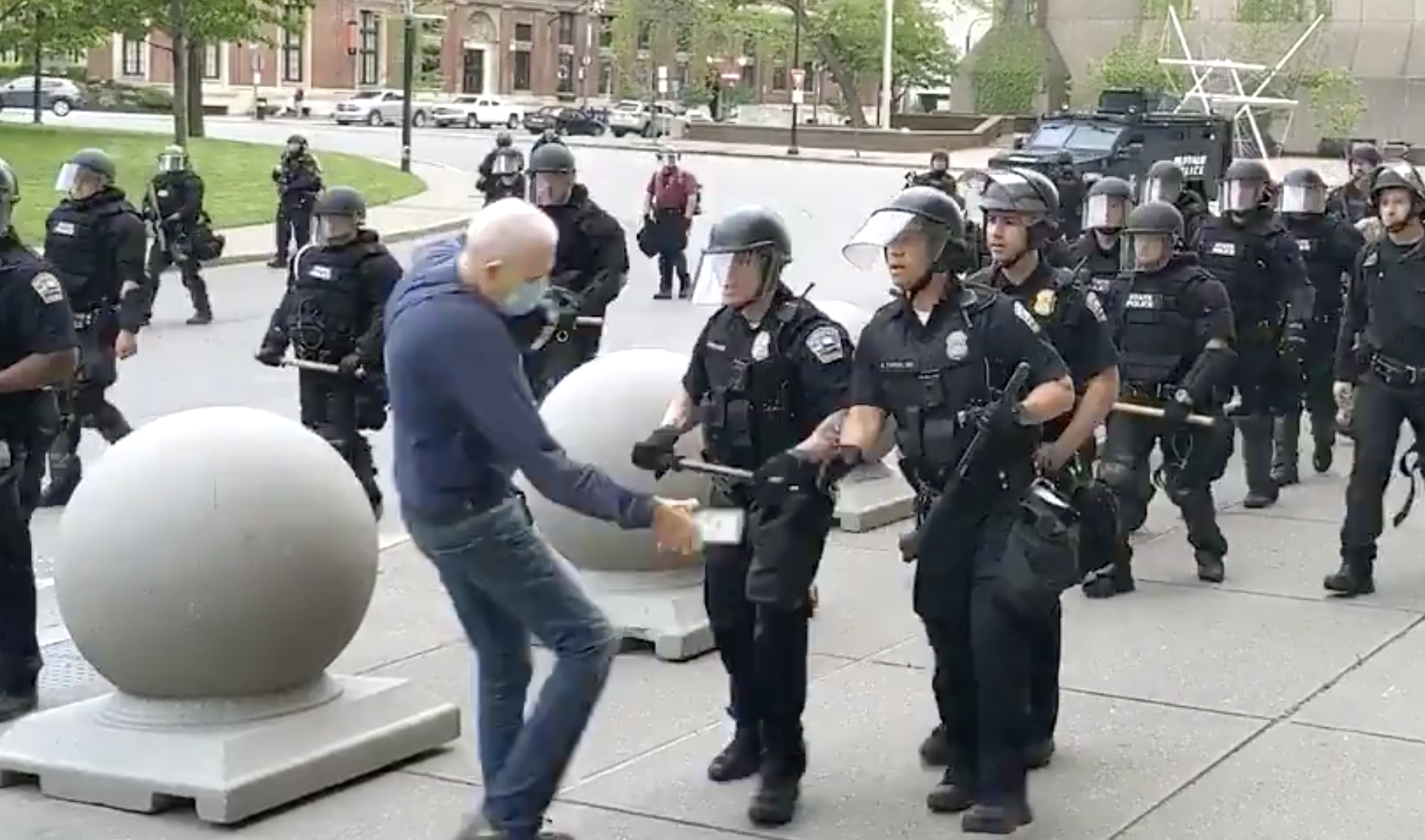 Commentators reacted with shock and disgust to President Donald Trump’s conspiracy theory that a 75-year-old man who was attacked and hospitalized by police last week “could be an ANTIFA provocateur.”

Two Buffalo police officers were charged with felony assault for shoving longtime activist Martin Gugino to the ground outside City Hall, resulting in Gugino hitting his head and bleeding from his ear. Gugino remains hospitalized, in “serious but stable” condition, according to his lawyer.

WARNING: GRAPHIC CONTENT Video shows two police officers in Buffalo, New York, shoving a 75-year-old man to the ground. The sound of a crack is heard and blood trickles from the man’s head https://t.co/JOGKvPOjoD pic.twitter.com/TBqs4gelmi

“Buffalo protester shoved by Police could be an ANTIFA provocateur. 75 year old Martin Gugino was pushed away after appearing to scan police communications in order to black out the equipment,” President Trump tweeted. “@OANN I watched, he fell harder than was pushed. Was aiming scanner. Could be a set up?”

Buffalo protester shoved by Police could be an ANTIFA provocateur. 75 year old Martin Gugino was pushed away after appearing to scan police communications in order to black out the equipment. @OANN I watched, he fell harder than was pushed. Was aiming scanner. Could be a set up?

Gugino’s lawyer responded to Trump’s tweet, asking “why the President of the United States would make such dark, dangerous, and untrue accusations against him.”

Commentators and journalists from both the left and right soon reacted as well with disbelief.

If he were trying to lose in November, what would he be doing differently? https://t.co/E6rQFFxDij

“There was blood leaking from his head. It is visible on the video. He is still in the hospital,” noted NBC News correspondent Heidi Przybyla, while CNN’s Chris Cillizza questioned, “A 75 year old dude? Who started bleeding from his ear?”

There was blood leaking from his head.
It is visible on the video.
He is still in the hospital. https://t.co/9bwzv0gqsU

A 75 year old dude? Who started bleeding from his ear? https://t.co/FdaqP5Kc0m

President Trump’s old friend Piers Morgan also weighed in on the comment, tweeting, “Shame on you, Mr Trump,” as Fox News contributor and former White House Press Secretary Ari Fleischer declared, “The President’s penchant for trafficking in conspiracy theories is, politically speaking, going to ruin him. This is reckless. He doesn’t know when to stop.”

The President’s penchant for trafficking in conspiracy theories is, politically speaking, going to ruin him. This is reckless. He doesn’t know when to stop. https://t.co/5ZmWC78d5M

Not taking the bait of Trump’s tweets is generally good policy, but this is so despicable and sinister it merits an exception. https://t.co/xI4aaHoMcj

Broken record playing again — this man has serious mental health issues which we are ignoring as a country. This is well beyond playing partisan politics. He is living in a sick and twisted alternative universe. He’s probably hearing voices at this point. But lets all ignore it https://t.co/SJubVWvOUR

The president of the United States flat out defending police brutality–and not with the usual, “the police are under huge pressure, they’ve got to make split-second judgment calls” type of excuses, but with unabashed blaming-the-victim conspiracy theories. https://t.co/I8nGlFlzB2

If current trends persist, Republicans are going to nominate an actual tinfoil hat next time. https://t.co/AGRahPfNeq

I’ll admit I was not expecting the “smash senior citizens” plank of the Republican platform https://t.co/BUKLsaiLxL

this is beyond deranged https://t.co/Ilaf3fZNF9

So now a 75-year-old protestor and peace activist cracked his *own* skull? https://t.co/Vy71guk5gs

This is unbelievable in so many ways, including the fact that Trump for some reason thought it was smart to mention Gugino’s age, just so we were all clear he’s defending cops who shoved a 75-year-old to the sidewalk. https://t.co/lwANVI37e4

Advocating shoving elderly people to own the libs https://t.co/PwR4iX8ORC

This conspiracy theory the president is pushing about a 75-year-old Antifa mastermind skimming police scanners with his phone wouldn’t meet InfoWars’ standards.

It is some next level Batboy stuff, and clearly a sign of the Antifa Panic to come.https://t.co/xzXYVDK8Gq

The OAN conspiracy theory the president is livetweeting here was reported by an ex-Sputnik (Russian state media) reporter, who last month claimed coronavirus was a cover by George Soros, Bill Gates, Dr. Fauci, the Clintons and China for “population control.” https://t.co/k2qmNRZq26

Martin Gugino is a a longtime peace activist who has worked with the Plowshares and Catholic Workers, the movement started by Dorothy Day https://t.co/UJsmyBwGid

When this line of argument fails, Trump will retreat to his classic all-purpose excuse: “It was Obama who shoved the 75 year old man to the sidewalk and cracked his head.” https://t.co/WiOrCgRjJ5

Those drugs that you take which cause your intense sniffling and snorting when you are amped up are officially making you psychotic. https://t.co/JFoQXaU2In

Trump’s latest tweet is a reminder that he is not a political genius, marketing savant, or master media manipulator. He is a deeply stupid, narcissist that stumbled backwards into the Presidency despite getting millions fewer votes.

The worst part is: He could win again.

One of geriatric antifa’s most dastardly tactics is to crack their own skulls on the pavement to frame the police. This is well-known.

POTUS aides and campaign constructed this week around getting him into the conversation around rebuilding / recovering, listening to ideas about police reform, etc. https://t.co/cE6PmRmsBG

No, the president is not trying to orchestrate a media distraction for political purposes or cleverly drawing attention away from bad headlines. He’s just getting mad at the things on his TV and tweeting through it.

Senior administration official: “The tweets speak for themselves” https://t.co/hidxIgNROK

The Washington Post reported on Saturday that “Gugino is a member of two nonprofits: PUSH Buffalo, which focuses on affordable housing, and Western New York Peace Center, a human rights organization,” and “is also part of the Catholic Worker Movement.”