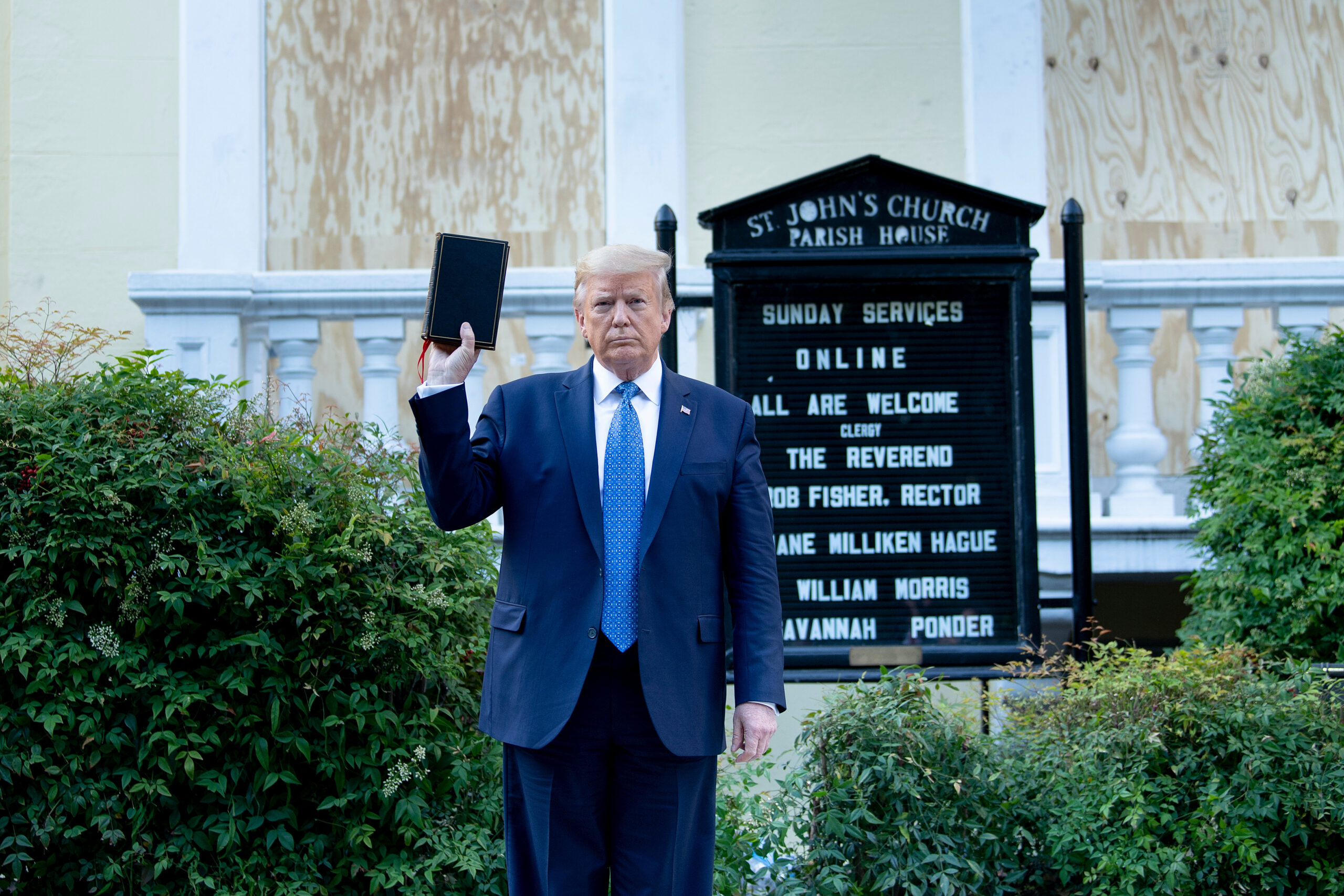 A reverend at St. John’s Episcopal Church in Washington D.C. Monday claimed that church clergy were tear gassed in order to clear the area for President Donald Trump’s “cheap political stunt” and “photo opportunity” in a furious post.

After delivering a speech in the Rose Garden, the president made his way through Lafayette Square, which had been cleared of protestors by police, to stand outside of the church that had been set on fire by rioters on Sunday.

“Friends, I am ok, but I am, frankly shaken,” wrote Rev. Gini Gerbasi in a post on Facebook after the incident Monday. “I was at St. John’s, Lafayette Square most of the afternoon, with fellow clergy and laypeople – and clergy from some other denominations too. We were passing out water and snacks, and helping the patio area at St. John’s, Lafayette square to be a place of respite and peace. All was well – with a few little tense moments – until about 6:15 or so.”

Gerbasi — who is the Rector of St. John’s Church in Georgetown, but was at St. John’s near the White House on Tuesday — wrote that police started clearing the streets “Around 6:15 or 6:30.”

“They started using tear gas and folks were running at us for eyewashes or water or wet paper towels. At this point, Julia, one of our seminarians for next year (who is a trauma nurse) and I looked at each other in disbelief,” she continued, adding, “I was coughing, her eyes were watering, and we were trying to help people as the police – in full riot gear – drove people toward us.”

Gerbasi said, “We were literally DRIVEN OFF of the St. John’s, Lafayette Square patio with tear gas and concussion grenades and police in full riot gear. We were pushed back 20 feet, and then eventually – with SO MANY concussion grenades – back to K street. By the time I got back to my car, around 7, I was getting texts from people saying that Trump was outside of St. John’s, Lafayette Square.”

“I literally COULD NOT believe it. WE WERE DRIVEN OFF OF THE PATIO AT ST. JOHN’S – a place of peace and respite and medical care throughout the day – SO THAT MAN COULD HAVE A PHOTO OPPORTUNITY IN FRONT OF THE CHURCH!” the reverend protested. “PEOPLE WERE HURT SO THAT HE COULD POSE IN FRONT OF THE CHURCH WITH A BIBLE! HE WOULD HAVE HAD TO STEP OVER THE MEDICAL SUPPLIES WE LEFT BEHIND BECAUSE WE WERE BEING TEAR GASSED!”

Gerbasi concluded, “The patio of St. John’s, Lafayette square had been HOLY GROUND today. A place of respite and laughter and water and granola bars and fruit snacks. But that man turned it into a BATTLE GROUND first, and a cheap political stunt second. I am DEEPLY OFFENDED on behalf of every protestor, every Christian, the people of St. John’s, Lafayette square, every decent person there, and the BLM medics who stayed with just a single box of supplies and a backpack, even when I got too scared and had to leave.”

The post received over 25,000 likes and went viral on social media.

“I am outraged,” she said. “The president did not pray when he came to St John’s nor, as you just articulated, did he acknowledge the agony of our country right now — in particular, that of the people of color in our nation who wonder is anyone in public power will ever acknowledge their sacred worth and who are rightfully demanding an end to 400 years of systemic racism and white supremacy in our country … We distance ourselves from the incendiary language of this President.”