Trump Goes After Dr. Fauci, Trashing Him Over Masks: ‘Tony’s Pitching Arm is Far More Accurate Than His Prognostications’ 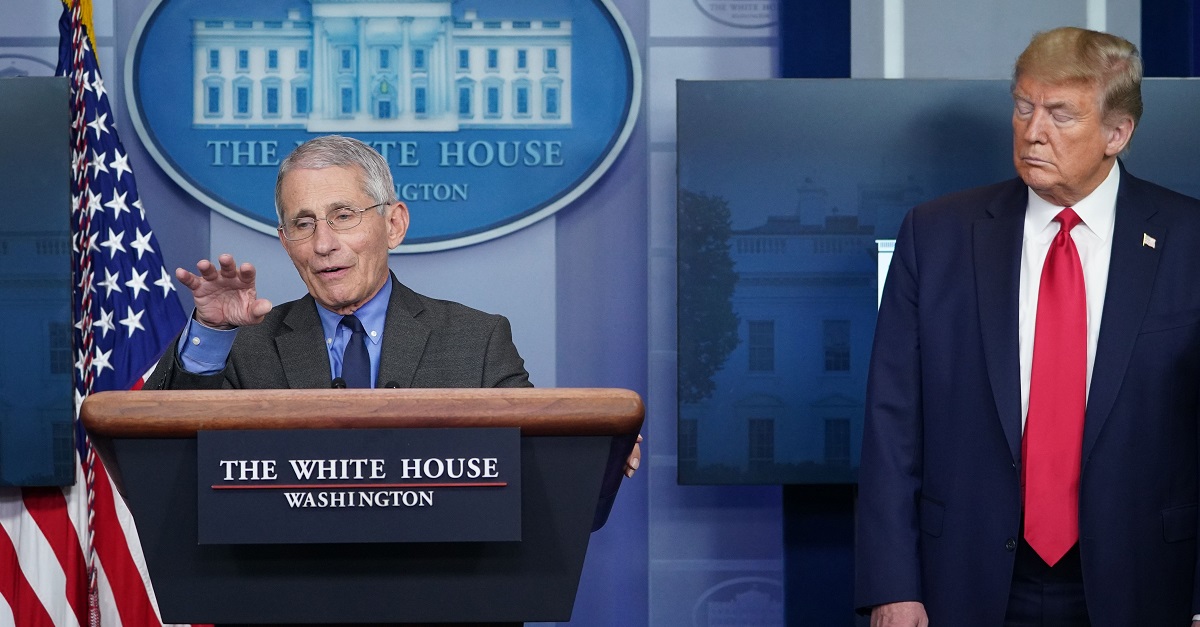 President Donald Trump is going after Dr. Anthony Fauci one day after the infectious disease expert blasted the Trump campaign for taking him out of context in an ad.

In a Tuesday morning tweet, the president took a pointed shot at Fauci — making a sarcastic reference to a wildly errant first pitch thrown by the doctor at a Washington Nationals game in July.

“Actually, Tony’s pitching arm is far more accurate than his prognostications,” Trump wrote. “‘No problem, no masks.’ WHO no longer likes Lockdowns – just came out against. Trump was right. We saved 2,000,000 USA lives!!!”

Actually, Tony’s pitching arm is far more accurate than his prognostications. “No problem, no masks”. WHO no longer likes Lockdowns – just came out against. Trump was right. We saved 2,000,000 USA lives!!! https://t.co/YyLyCsbZ7a

Trump’s taunt follows Fauci slamming the campaign for quoting him in an ad saying that the administration’s response to the pandemic was “impressive.” Fauci made the comment in March.

“I think it’s really unfortunate and really disappointing that they did that,” Fauci told CNN’s Jake Tapper on Monday. “It’s so clear I’m not a political person. I have never either directly or directly endorsed a candidate. And to take a completely out of context statement and put it in which is obviously a political campaign ad, I thought was really very disappointing.”

The Trump campaign said they were not pulling the ad, despite Fauci’s objections. The doctor warned of ramifications if they were to proceed with another commercial using his words.

“That would be outrageous if they do that,” Fauci told Tapper. “In fact, that might actually come to backfire on them. I hope they don’t do that. That would be kind of playing a game that we don’t want to play.”