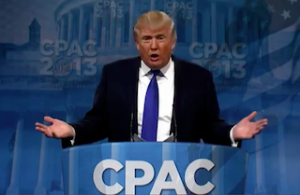 As soon as it was announced that Donald Trump would be delivering one of the longer speeches this year’s CPAC, the world knew that something special was coming.

Trump did not disappoint, opening day two of the conference with a wide-ranging and utterly serious vision for the future of the Republican Party. If the GOP simply follows these specific ideas below without any question or hesitation, they are sure to find themselves back on top in no time.

2. Immigration reform is a “suicide mission.”
“Now this is a hard one, because when it comes to immigration you know that the 11 million illegals, even if they’re given the right to vote…the fact is, 11 million people will be voting Democratic. You have to be very, very careful because you could say that, to a certain extent, the odds aren’t looking so great for the Republicans, that you’re on a suicide mission, that you’re just not going to get those votes.”

4. Stop calling yourselves the “stupid party.”
“What a horrible statement to make. Because that’s the statement that’s going to come back and haunt you when the Democrats start using it.”

5. Don’t take Karl Rove’s money.
”When you watch someone who spends $400 million on campaigns with perhaps the worst ads I’ve ever seen — they did ads on Obama I thought were being paid for by the Obama campaign… When you spend $400 million and it’s a failure and you don’t have one victory, you know something is seriously, seriously wrong.”

6. Spend more time talking about how rich you are.
“I’ve made over $8 billion. I’ve employed tens of thousands of people. And yet I’m continually criticized by total light weights all over the place. It’s unbelievable. If Mitt Romney made one mistake, it’s that he didn’t talk enough about his success. Because honestly, people really want success. They want a leader who’s successful.”

7. Never go to war without “paying yourselves back” in oil.
“When I heard that we were first going to Iraq, some very smart people told me we’re actually going for the oil, and I said, ‘Alright, I get that, there’s nothing else, I get it. We didn’t take the oil. And then when I said, we spent $1.5 trillion, we should take that — you know, they have the second-largest oil reserves in the world after Saudi Arabia, so $1.5 trillion is nothing… we should take it and pay ourselves back… What the hell are we thinking?”