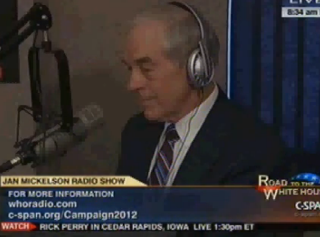 As his ascent grows increasingly questionable in light of scrutiny of his foreign policy stances and several-decade-old newsletters, it appears the questions about the latter have become inescapable for Rep. Ron Paul, even from garden variety political enthusiasts. Rep. Paul appeared today on Iowa’s WHO-AM with host Jan Mickelson and had to confront repeated questions on how it was possible for him not to know the content of his newsletter.

The caller initially asked, simply, how confident Rep. Paul was that the newsletters– not released while Rep. Paul was in Congress, but in the interim between his initial term and today– were representative of his views on “on taxes, on monetary policy, the Second Amendment, the Tenth Amendment, all the things that you hold dear?” The caller appeared more interested in the conspiracies about those topics in the newsletters than the racist rhetoric, of which Rep. Paul has answered questions about repeatedly. Perhaps because of this, Rep. Paul gave a lengthy answer, admitting that he wrote “a certain portion of them” on economics. He then explained:

“This was in between, it would be an investment letter. This would be material that I would turn in, and it would become part of the letter. But there were many times when I didn’t edit the whole letter, and things got put in. And I didn’t even really become aware of the details of that until many years later when somebody else called and said, you know what was in it? But these were sentences that were put in, a total of eight or ten sentences, and it was bad stuff. It wasn’t a reflection of my views at all. So it got in the letter, I thought it was terrible, it was tragic, you know and I had some responsibility for it, because name went on the letter. But I was not an editor. I’m like a publisher.”

He went on to explain that even newspaper publishers get “junky stuff” in their newspapers, and that the problematic sentences tended to be something like “ten sentences out of 10,000 pages, for all I know.” He also, again, disavowed “all these views” that were problematic, though did not indicated whether he meant any specific ones on the economy or race.

The caller pressed on, however, asking about the conspiracies in the letter. “You had one newsletter from start to finish with fear that the $50 bill, because it was going to be made pink, and it was gonna have all kinds of things that can track us down, so we should all be afraid that maybe tomorrow they’re gonna require us to turn in all of our old money,” the caller noted, to which Rep. Paul responded, “the paper money is now pink, you know?”

The segment via C-SPAN below: