ABC Pundits Take On Christie’s ‘Bromance’ With Clinton, Obama: Only Republican Who Can ‘Flip Some Blue States’
video

ABC Pundits Take On Christie’s ‘Bromance’ With Clinton, Obama: Only Republican Who Can ‘Flip Some Blue States’ 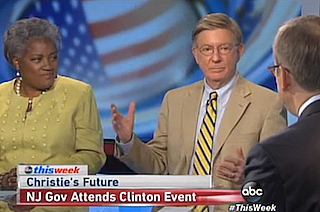 Guest-host Jonathan Karl tried to get his panel on This Week going over the political ramifications of New Jersey Governor Chris Christie’s recent bipartisan tour, in which he high-fived Barack Obama and shared the stage with Bill Clinton. But the roundtable unanimously agreed that Christie is positioning himself quite well for a potential 2016 run.

“They’re not going to remember it,” Gingrich said of whether Republican voters would hold Christie’s outreach against him. “The average American is so sick of the petty negativity. He says, ‘Look, I was governor of New Jersey, I did everything I could to help the state of New Jersey, and when I get to Washington I’m going to do everything I can to help America. If you want someone too stupid to help their state, I’m sure you’ll find one of my opponents more acceptable.'”

“His message is his persona,” George Will said. “His persona is ‘I’m the I don’t give a damn politician. I’m gonna be what I am, get over it. I’m large, I’m loud, accept me.’ But he’s gonna say, ‘Look, I can carry a blue state.’ There are eighteen states plus the District of Columbia that have voted Democratic in six straight elections. They’ve got, what, 244 electoral votes? Democrat starts out looking for twenty-six electoral votes. Christie’s argument to the Republicans is going to be: you need someone who can flip some blue states, and I’m the one who can do it.”

“Chris Christie is looking at two calendars,” Donna Brazile said, “the political calendar of 2013, which involves his own reelection and of course the special election. He has to show that he can win a signifcant amount of votes, fifty-seven, fifty-eight, fifty-nine percent, and right now the polls suggest that he’s leading his opponent. And then he can look at 2016 a couple months from now.”

“But there’s no question that that bromance that you saw between Chris Christie and Bill Clinton? That’s real,” Brazile said. “Because they found common ground on the issues that matter to most Americans.”