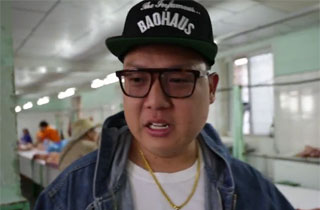 Last year, a great milestone for Asian-Americans was reached when ABC announced it was turning Eddie Huang‘sFresh Off the Boat, a hilariously provocative book about his Florida childhood growing up with Taiwanese immigrant parents, into a television series. The last time an Asian person had a sitcom was with Margaret Cho’s All-American Girl in 1994, which changed premises so many times that eventually people forgot it was about Asians at all. But finally, in post-racial America, a major television network believed that the country was ready for a clever, nuanced sitcom about a family of Asian immigrants with a hip-hop-loving son, whose humor wasn’t derived from archaic Orientalist jokes. Hashtag Progress!

HA HA NOT REALLY, said ABC, announcing today in Deadline that they found a lead for their hot new sitcom Far East Orlando.

See? Don’t you get it? Because the Huang family hails from “the Far East”? They’re so Asian-y! A land of Orientals with chinky eyes and Fu Manchu moustaches! But they’re in Orlando! Kung fu meets sunshine! Panda Express meets Hooters! Gongs meets boobs!

No? What? That title seems potentially offensive? Well, yeah.

(Oh, and also, everyone in Asia can be called a “Far East” person! There will be absolutely no blowback from people hailing from countries with longstanding animosities towards one another, like, say, Taiwan and China. Nope. None.)

Eddie Huang, who is a producer on the show, was not pleased:

ATTN ASIAN & ALL OTHER PEOPLE: Isn't "Far East Orlando" an archaic name? LET @ABCNetwork know you want it to be called FRESH OFF THE BOAT!

And the internet joined in his displeasure:

For the record, I'm not crazy about the name change from 'Fresh Off The Boat' to 'Far East Orlando.'

@ABCNetwork do #FreshOffTheBoat right… Far East Orlando? Clearly there wasn't a single Asian person in that board room B. @MrEddieHuang

And any self-respecting person who was born after 1950 should probably be irked, because really, “Far East”?

(A few commenters pointed out that Huang’s sitcom might be falling victim to the problems that plagued Cho’s sitcom, including, but not limited to, having to be coached on “acting Asian” by a real-life Asian coach. If this happens to Fresh Off The Boat, or whatever racist-ass name it’s going to be called, we Asians should quit the internet. This threat will hold water, because we keep your internet running. Don’t mess with us.)