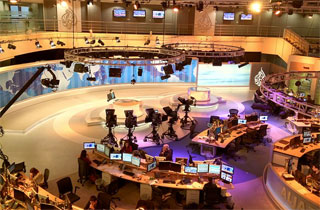 A lawsuit alleging workplace harassment isn’t the worst of Al Jazeera America’s problems at the moment: A New York Times exposé alleges that pretty much everything is wrong at the network, summarized by the time that its chief executive threatened to bankrupt its highest-profile journalist, Ali Veshi, in the middle of the newsroom.

While the network is still hoping to be known for savvy journalism, no network can actually do good journalism when the organization is floundering, and an average of 30,000 people watch their programs every night. (To put that in perspective, Ronan Farrow Daily was axed when it only racked in 11,000 viewers, and that was one show that airs in the middle of the day. And if you think MSNBC’s well-documented ratings problem is bad, consider this: Al Jazeera America, a full-fledged network with 650 employees, only beat MSNBC once, for two hours in the daytime schedule.)

The problem, according to current and former staffers interviewed by the Times, lies in its leadership: the head of Al Jazeera America, Ehab Al Shihabi, has created a culture of low morale and fear of retaliation in the newsroom, as well as a hint of sexism, and, um, why has the Middle East correspondent gone missing from the office? (The network won’t hurt for money, mainly because it’s financed “from the deep pockets of the Qatar government”.)

As a prime example — and there are lots of examples in the story — here’s how Al Shihabi allegedly treated one of the network’s stars:

The station’s most recognizable face, Ali Velshi, a veteran of CNN, who hosts a prime-time show, led a similar meeting in February. Mr. Velshi’s line of questioning and his exchanges with Mr. Al Shihabi were particularly heated, according to five people present at the meeting.

Days later, when Mr. Velshi was not present, Mr. Al Shihabi threatened to sue Mr. Velshi and fire him, according to employees who said they heard him speaking openly in the newsroom.

Al Shihabi virulently denied that there were any problems in the newsroom, despite its current hemorrhage of employees and executives, and pointed to their award-winning journalism and respect in the industry. “We are committed to raise the morale of our staff,” he told the Times. “If people are not happy, we will make them happy. We will invest in their morale.”