Cooper To Begala: If Weiner Was GOP Would You Still Say ‘So What, Who Cares?’ 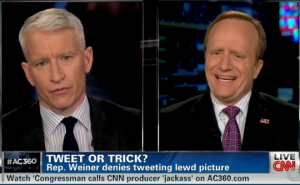 The punditry over “Weinergate” continues with Anderson Cooper last night trying to moderate a fair discussion of the controversy. Yet to Cooper’s amusement and bewilderment, liberal commentator Paul Begala demonstrated a convincing yawn over the story, but didn’t seem to convince the others in the conversation that “what Anthony Weiner is even accused of doing, even if true, is just nothing.”

Begala suggested “wake me when we have a real sex scandal.” Yet Cooper smartly followed-up with Begala, asking him “if this was a conservative Republican, would you be saying the same thing?” Begala responded:

“Yes, who allegedly had a picture of him taken in his underwear and then someone hacked his account and sent it out? . . . But it is a right-wing blogger who was pushing this, and a pretty unreliable one at that, which mama always said, consider the source.”

Begala saying “so what, who cares” in reaction to the story, was a humorous and likely unintentional reminder of Fred Armisen’s imitation of Joy Behar on Saturday Night Live. Yet many critics of Begala would likely find his attempt to shift the focus from Weiner’s troubles to a potential Republican headache even more funny:

“The career-ending scandal could be the Governor of New Jersey, who is taking a state helicopter apparently yesterday to go to see his kid’s baseball game. I mean, that’s the kind of thing that voters get furious about.”

The fact that according to Begala, Chris Christie’s ordeal could be “career-ending,” but Weiner’s still evolving story is nothing that voters should be concerned with, suggests that Cooper’s question was right on the money.