Anderson Cooper Wants To Know When The Ladies Of The View Turned Into Dr. Evil 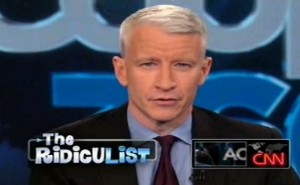 Is Anderson Cooper getting a jump on starting a beef with his soon-to-be rivals of daytime television? The future star of Anderson saw the ladies of The View mock the House Weeper-elect John Boehner on Monday, but he wasn’t laughing along. No, the CNNer slapped the women onto the RidicuList, his PG-rated version of Keith Olbermann‘s Worst Person in the World. “Since when did the ladies on The View turn into Dr. Evil from Austin Powers?” he asked with disappointment.

But this RidicuList entry should’ve been asterisked, since Elisabeth Hasselbeck defended the bawling Boehner against the ridicule of her co-hosts, primarily Joy Behar and Barbara Walters.

And so did Cooper:

Aren’t people always saying they want politicians to be more real? And aren’t men always being told now that we’re supposed to be more sensitive, more vulnerable, willing to show emotions? Barbara Walters said if Nancy Pelosi cried so much, she’d be called weak, which is probably true actually. Pelosi has said she doesn’t cry about politics because you have to be a professional. But can you be professional and sentimental at the same time? I’m one of the most uptight people around, believe me, but I’ve been known to shed a tear from time to time. Sure, I, you know, try to keep it limited to a darkened theater while watching Bambi.

He ended the segment with both a plea and a challenge: “Ladies of The View, just let the man cry already. And if you want to shed a tear because you’re on tonight’s RidicuList, go right ahead. We’ll love you all the more for it.”

What a man. Watch Cooper defend a dude’s right to cry in public in the CNN clip below.