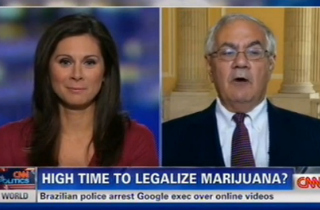 A common trope among anti-drug crusaders is that us reformers are just potheads who want to legalize drugs simply so we can smoke in peace without fear of our deserved arrests.

It’s an image drug reformers have long had to fight — made only slightly easier with the onset of groups like Law Enforcement Against Prohibition (LEAP), made up of dedicated police officers disgusted by a costly war on drugs — but we always run the risk of being associated with lazy kids sitting in their mom’s basement “chooming” doobies on the regular.

Appearing last night on CNN’s OutFront with Erin Burnett, long-time drug reformer Rep. Barney Frank (D-MA) gave an impassioned defense of legalizing marijuana while admitting that he himself is not a drug user — except for one particularly comic experience.

At first, Frank told Burnett that our current marijuana prohibition “contributes to a good deal of the sense of unfairness of young people that are told they shouldn’t do this but then see older people engaging in things that have a greater impact on people.” He made the economic point that “one of the best things we can do to reduce state expenditures is to stop going after people who use marijuana.”

“I thought for a second that I was talking to Ron Paul,” joked Burnett.

“We are in great agreement on this and not banning gambling,” Frank conceded.

And then to end the segment, Burnett got a little curious and asked the stereotypical (albeit relevant) question: “Do you smoke regularly?”

“I did have a brownie once. It made me sleepy,” he added. “But you know, I don’t gamble either.”

Just like conservatives personally believing marijuana use is sinful or immature shouldn’t prevent them from defending free adults to make their own choice about it.