Bill Clinton to Piers Morgan: Putin ‘Kept His Word in All Our Deals’ 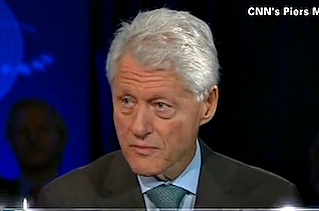 “Did Putin ever renege on a personal agreement he made to you?” CNN’s Piers Morgan asked in an interview at the Clinton Global Initiative.

“No, he did not,” Clinton replied.

“So behind closed doors, he could be trusted?” Morgan asked.

To that Clinton considered his words carefully. “He kept his word in all of the deals we made,” he said.

“We had a really good, blunt relationship,” Clinton said. “I think the right strategy, most of the time—but it’s frustrating to people in your line of work—is you should be brutally honest with people in private. And then if you want them to help you, try to avoid embarrassing them in public. Sometimes they do things which make it impossible for you to keep quiet.