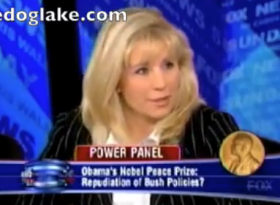 John McCain said today of President Barack Obama‘s Nobel Peace Prize that, “As Americans, we’re proud when our President receives an award of that prestigious category…Americans are always pleased when the President is recognized by something on this order.” According to Bill Kristol and Liz Cheney on Fox News Sunday — not quite.

Said Cheney: “I think the president himself understands he didn’t earn this prize…therefore the notion that he’d go to Oslo to accept the prize just sort of adds to the farce.” She noted the wording of the citation and took it to mean that the Nobel committe “would like to live in a world in which America is not dominant” and speculated that Obama, in his speeches about global diplomacy, had convinced them that “President Obama also doesn’t believe in American dominance.” Said Cheney: “I think unfortunately they may be right.”

Kristol, for his part, joked that he should have gotten the prize because just as Obama had given a few good speeches, he’d written a few good columns. Er, yes, indeed. “This is an anti-American committee, they’ve now given the prize to President Obama — I think he should have refused it, respectfully, but I think the second-best thing would be to go over and give a pro-American speech on December 10th.” On the matter of Obama’s belief in American exceptionalism: “I don’t think he’s a believer in it in the way perhaps some previous American presidents have been.”

Compare and contrast with John McCain’s diplomatic, if not effusive, response here.