Bill Maher Defends Jay Leno by Comparing Him to Israel

Bill Maher Defends Jay Leno by Comparing Him to Israel 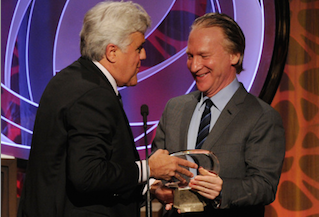 Bill Maher inducted his long-time friend Jay Leno into the TV Hall of Fame last night, and in the process offered up a unique defense of the former Tonight Show host. Just like Israel, Maher said, Leno “isn’t perfect but he’s held to standard I don’t think anybody in the world is expected to live up to but him.”

According to Variety’s Brian Lowry, Maher went on to dismiss the idea that Leno had “stolen” Conan O’Brien’s dream job by agreeing to return to the Tonight Show in 2010, calling it “the most hysterical thought I’ve ever heard, in a business known for bullshit.” He added, “You have to work really, really hard to have a feud with Jay Leno,” he said.

RELATED: Jay Leno on Fallon, Meyers and the Chances He’ll Appear on Letterman

Maher did not let NBC off the hook either for the way it treated Leno. According to Deadline’s Lisa de Moraes, he used a car metaphor to describe Leno’s career as a drive in “some giant gleaming pristine luxury car with the competition far in the rearview mirror — except one time when NBC… blindsided him and beat the shit out of his beautiful car.”

“Jay reminds me a little of Israel,” Maher said. “He isn’t perfect but he’s held to standard I don’t think anybody in the world is expected to live up to but him. He’s “the most Machiavellian and also the most morally upright person I know in show business. He will hide in a closet but never needs a confessional booth.”