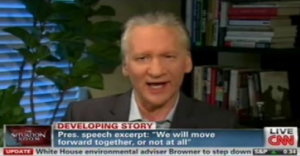 Comedian Bill Maher appeared on CNN with Wolf Blitzer and not only expressed his continuing disappointment with President Obama but also took CNN to task for deciding to air Congresswoman Michele Bachmann‘s Tea Party response to the State of the Union. Although Obama received a grade of C+ from Maher, his harsh criticism was not just limited to the President.

Maher was not pleased to learn that no attempts at gun control would be mentioned in Obama’s speech, especially since “Dick Cheney seems to be to the left of Barack Obama on the gun issue.” Also Maher didn’t like the idea of so many people crediting Obama’s move to the center as the reason for his surging popularity. Instead, Maher suggested the latest polling could merely reflect support for a President after a tragedy or people tired of seeing Speaker of the House John Boehner crying. This prompted Wolf to respond with a humorous quote sure to be saved for posterity, “I don’t cry because I wake up being Wolf Blitzer, that’s for sure.”

Maher also echoed many other commentators who are tired of hearing about “civility” by sarcastically saying:

“When a madman kills people at a Safeway, the problem isn’t guns or nuts, it’s that we haven’t been polite enough to each other. Yes, if Barney Frank and Rand Paul are sharing an arm rest, I expect all our problems to go away. Of course, as always . . . it’s symbolism, that’s all we know how to do. We don’t how to solve problems anymore, we just know how to attack it symbolically.”

Although it seems like Maher is just angry about everything (ok maybe he actually is), watching the interview at least confirms he hasn’t lost his sense of humor about it all. Despite Obama not providing Maher with anything on his progressive wish list (single-payer health care, bringing home the troops from all foreign countries, an end to the drug war, etc.), it doesn’t seem like Maher has anywhere else to turn so he will just have to be satisfied with the “center-right party,” his nickname for the Democrats.