Bill Maher To Nouriel Roubini: ‘Do You Ever Despair, Dr. Doom?’
video

Bill Maher To Nouriel Roubini: ‘Do You Ever Despair, Dr. Doom?’ 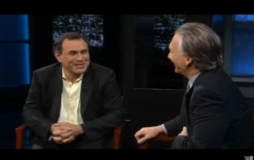 CNN should really devote some serious resources to convincing Bill Maher to take over the 8pm slot just vacated by Campbell Brown. Even if it’s just a temporary stop-gap move to get them through to the 2012 election. Maher is easily one of the more magnetic (also, explosive) interviewers on television today, no doubt due in part to the fact that he is uncensored and subsequently unpredictable; something CNN could probably find a way to work around (5 second time delay?). Steve Krakauer thinks Maher is unlikely to leave his cushy, weekly job at HBO for the nightly grind of a cable host, but wow would he be a powerhouse move for CNN, moreover, the seat would give Maher some serious clout going into what is clearly going to be a combustible 2012 reelection campaign, which I suspect might be quite enticing to him.

This is all merely a long preamble to say that Maher interviewed ‘Dr. Doom’ Nouriel Roubini the other night and after some joking about how Roubini, as an Iranian Jew born in Turkey and raised in Italy he “wanted to drive himself into the ocean” Maher (sort of trepidatiously asked) “what’s next?” Roubini, you will probably recall, predicted the housing crisis a number of years before it came to pass. Said Roubini: “It’s going to be pretty bad.” He added that the banks need to be broken up not because “they are too big to fail” but because “they are too big to be saved.” Happy Sunday morning! Video below.