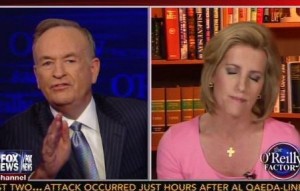 Bill O’Reilly tonight responded to criticisms from the right over his commentary last week that gay marriage opponents need to do more than just “thump the Bible” if they want to win the argument. After a Talking Points Memo largely focused on mocking liberal media attempts to gin up a feud between himself and Rush Limbaugh, O’Reilly brought on Laura Ingraham, who actually told O’Reilly he was wrong in saying what he said. O’Reilly was stunned with Ingraham, shouting over her and telling her “I’m disappointed in you.”

Ingraham first surprised O’Reilly by agreeing that there actually is a feud of sorts going on between him and people like Limbaugh, given Limbaugh’s harsh condemnation of O’Reilly’s commentary. O’Reilly dismissed the idea he and Limbaugh are enemies, saying “I don’t care what he says, he can say whatever he wants.”

Ingraham agreed with O’Reilly that gay marriage opponents are not always good at making their case, but said O’Reilly unnecessarily insulted them. O’Reilly insisted he made an “honest point” about gay marriage, and shocked Ingraham by saying that opponents cannot cite the Bible in a policy argument. Ingraham told O’Reilly he was being disrespectful, which led O’Reilly to tell Ingraham he’s “disappointed” in her.

O’Reilly scolded her for criticizing her for his “accurate description,” saying he doesn’t really care whether it was unhelpful or if anyone took offense, it was an “accurate and honest attack.”

Watch the fiery segment below, courtesy of Fox News:

If you want to see O’Reilly’s Talking Points Memo, in which he rails against “gutter snipes” on the left ginning up controversy, you can watch that here: