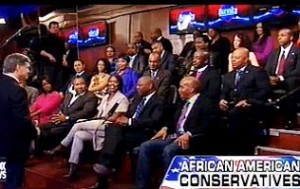 The show kicked off with Sean Hannity interviewing Dr. Ben Carson. Hannity asked Dr. Carson what kind of insults he has received since coming out publicly as a conservative. Carson noted:

Some of the words cannot be used. It’s really kind of sad. I feel more sorrowful for the people who do that, than I feel angry for them. I represent something that they just can’t quite get their heads around: ‘How can you be black and not march lock-step behind the [airquote] leaders?’ ‘How can you think for yourself?’ ‘And how can you actually have some ideals that actually make sense that don’t agree with their leaders?’ I am very hopeful that this a trend that will be broken. I’m going to continue to speak out. Of course, there is an old trick that you ostracize, you ridicule, you isolate, and you keep repeating…. I’m not sure it’s going to work quite frankly because I don’t plan on going anywhere.

In a gripping moment, when Hannity asked the townhall participants how many have been “called horrible names because of [their] conservatism,” every participant’s hand shot up.

Dr. Carson noted that this demonstrates to him that “the very people who love to talk about tolerance are some of the least tolerant people there are.”

Hannity and Dr. Carson then discussed Hannity’s recent remarks that black conservatives have no freedom of speech, with Dr. Carson agreeing and expanding on Hannity’s point:

One of the founding principles of our nation is freedom of speech and freedom of expression. And yet they are so many people who are afraid to talk. I’ve gotten so many emails and letters from people who say ‘I support you 100% but please let this remain anonymous.’ Why? Because they don’t want to have the fiery darts thrown at them.

Following the brief interview, Hannity opened up the discussion to the townhall participants, consisting of an array of black conservative ‘all-stars,’ such as Star Parker, David Webb, Ron Christie, Jesse Petterson, Kevin Jackson, Deneen Borelli, Crystal Wright, and Reginald Jones, among others.

The Wall Street Journal’s Jason Riley noted the racist comments that often emerge from the Left, as well as the “double standard” applied to black conservatives:

There’s a need on the Left to almost psycho-analyze black conservatives, put ‘em on the couch. In other words, Justice Scalia’s views on affirmative action are simply wrong but Clarence Thomas is a self-hating, self-loathing traitor to his race. There’s a double standard. And I think the reason you have that is… if you can psycho-analyze someone, de-legitimize them, you don’t have to take on their ideas… and that’s what the Left tries to do to black conservatives.

Hannity noted that each of them is a “profile in courage.”

Kevin Jackson, Executive Director of The Black Sphere, noted Vice President Joe Biden’s comment about going into the “black sections” of his town, as an example of the level of racism on the Left that is simply dismissed or allowed.

Project 21’s Reginald Jones spoke on the threat to liberals’ “ownership” of black America, stating: “What Dr. Carson and everybody in here represents is a threat to their sense of ownership. Liberals, in total, believe that they own black America….”

Radio host David Webb added that the Left requires allies of “convenience” and victims, stating: “It’s about power and control.”

The spirited discussion was emotional at times, with Deneen Borelli wiping away tears near the end of the show.

Hannity expressed plans to hold an additional townhall on this issue, prompting cheers of agreement from the participants.

Click below to watch a clip from the show: