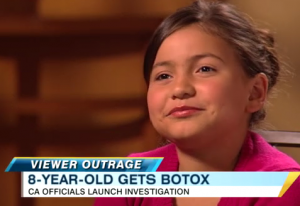 The story of the mother who gave Botox injections to her eight-year-old daughter has just veered off a cliff into the tabloid bizarre zone. According to a post this morning on TMZ, the “Botox Mom,” Sheena Upton, now claims everything about the story was fake. Upton, who signed a deposition, says a British tabloid, The Sun, approached her and asked her “to play the role of Kerry Campbell” for a story called “I Give My 8-Year-Old Daughter Botox.”

Upton says she was paid $200 and given directions. “I was provided with the story, instructions and a script to follow for a recorded interview.”

One of the interviews was a high-profile exclusive interview with Lara Spencer on ABC’s Good Morning America, which Upton claims paid her “a large fee.” After the interview created a national sensation, California child welfare officials took away her daughter. Upton writes in the deposition, however, “the truth is I have never given my daughter Botox, nor allowed her to get any type of waxing, nor is she a beauty pageant contestant.”

TMZ cites “an ABC insider” who says there was no compensation for the interview, however a third party was paid for the licensing of photos. (ABC’s stories do carry a graphic indicating a photo credit.)

We have just seen the sworn declaration on TMZ written by Sheena Upton, a.k.a. Kerry Campbell , and are vigorously investigating her most recent statement and rapidly shifting story. Good Morning America has repeatedly questioned Upton, members of her family, and other sources who again and again stood by the Botox story. Good Morning America is solely interested in getting to the truth and will share with our audience any new information that we find.

From the UK, The Sun also released a statement to Mediaite, flatly denying any effort to mislead:

The Sun strongly denies any suggestion it solicited or knowingly published a false story regarding Kerry Campbell and her daughter.

The article was published in good faith, in common with a large number of other news organisations around the world, after being received in full from a reputable UK news agency.

The agency reporter watched Ms Campbell administering what appeared to be Botox to her daughter and provided compelling photographs.

At no point did The Sun have any direct contact with Kerry Campbell or Sheena Upton.

The Sun is investigating the circumstances surrounding this story and consulting with lawyers on possible legal action.