Brzezinski Defends Media Scrutiny of Clinton’s Emails: Imagine ‘If This Were Dick Cheney’ 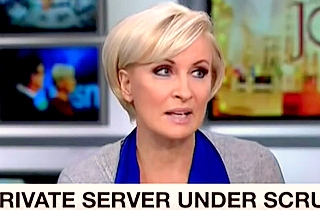 Mika Brzezinski defended the media’s scrutiny of Hillary Clinton’s personal email account Wednesday morning against accusations that it was much ado about nothing, arguing that if it were Dick Cheney who’d disappeared 30,000 emails we’d all be burning the place down.

Over the past week Morning Joe has been the first stop for Clinton-friendly figures like David Brock, Howard Dean, and James Carville, who dismiss the story as partisan noise.

RELATED: Morning Joe Battles David Brock over Clinton Emails: ‘What Planet Are You on?’

“If this were Dick Cheney,” Brzezinski said, “and he said I have my own server and I deleted e-mails I wanted to delete and you guys get the ones I give you, I’m sorry, there would be — ”

“– a federal judge would be compelling production immediately,” Scarborough said. (They complete each other’s sentences!)

Scarborough then took a nostalgia tour through the mid-90s Clinton scandals, saying past was prologue when it came to the Clintons and obfuscation.