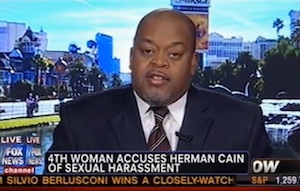 Appearing this afternoon on Fox News, Herman Cain advisor and self-described “good friend” Niger Innis defended the beseiged Republican presidential candidate, saying he had been the victim of racist stereotyping in the midst of his sexual harassment scandal. “I’m very disturbed by what I see as nothing more than an attempted character assassination using one of the more vicious charges and stereotypes — which I call the mandingo stereotypes, that being the overly sexed black-skinned, black man that has been used for a couple of centuries in our country.”

RELATED: Rush Limbaugh: ‘Shame On The Republicans Who Piled On Herman Cain’

Watch Niger Innis slam the charges being made against Herman Cain below via Fox News: