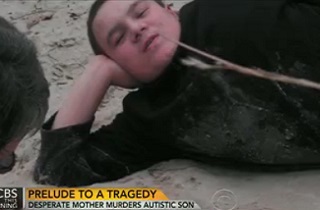 People with Autism Spectrum Disorders (ASDs) are routinely slandered in the news media, even by parents of autistic children, but nothing comes remotely close to a CBS News report that sickly excuses the murder of 14 year-old Alex Spourdalakis by his mother and an accomplice. The report has spurred a petition to have CBS News take it down, but they really need to air a complete retraction, and discipline everyone involved in this travesty.

On Friday’s CBS This Morning, reporter Sharyl Attkisson delivered a report that was fatally flawed on several levels, but I hesitate to even mention the reporting itself, because even if everything in the report was 100% above-board and true, it would not support the sick conclusion that permeates it: that Alex Spourdalakis’ mother had no choice but to murder him. This sounds like an exaggeration, surely, but it is not. This was the explicit message of CBS News’ report.

The closest anyone in this report comes to denouncing Alex’s murder is anchor Gayle King, who introduces the piece by saying “The case is extreme, but it shines a light on the struggles of hundreds of thousands of families coping with autism.”

“The case is extreme,” as faint a damnation as you will ever hear for murder, is as good as it gets in this four-minute report. From there, Attkisson sets up her story by saying that Alex Spourdalakis’ murder “might be just another unexplained tragedy if it were not for a documentary following his family in the months leading up to his death.”

Conversely, then, Attkisson is saying that this tragedy is “explained,” a statement which, on its own, isn’t necessarily outrageous, until you get to the “explanation.” It’s important, though, because it signifies the reporter’s, and CBS News’, explicit agreement with the explanations offered in the report for Alex’s murder. It is the reason all of these people should be disciplined.

Attkisson calls the documentary “a rare visual prelude to murder,” and adds that “it follows the tireless struggles of Alex’s killer, his own mother Dorothy and his caretaker, battling a system they felt was ill equipped to help autistic children.”

She then plays a clip of Polly Tommey, the documentary’s producer, explaining that “Dorothy was like any other autistic mother desperately trying to get help,” and enunciating the report’s conclusion.

“His death didn’t need to be,” Tommey says. “It was because there wasn’t anything in place for him.”

The converse of this is that, because there was supposedly not “anything in place for him,” the murder was necessary, a conclusion that is never challenged by the reporter, and indeed, endorsed by her earlier statement.

The report goes on to describe some of Alex’s medical and behavioral problems, bad reporting that I’ll touch on later, and then Attkisson again describes Dorothy Spourdalakis’ situation in desperate terms. “…Dorothy couldn’t handle Alex while she pursued treatment. She said no facility would keep him, and insurance wouldn’t cover it.”

“Dorothy’s e-mails reflected growing desperation and exhaustion,” Attkisson says, quoting one. “‘Alex has been forgotten. I didn’t have a safety net so i could help him recover.'”

Attkisson then describes the murder, and omits some key details. “In June, police found Alex dead at home, his mother and caretaker barely alive after they allegedly overdosed him on medicine, stabbed him in the heart, and attempted suicide.”

What really happened was, after a week of planning, Dorothy and Alex’s Godmother Jolanta Agatha Skrodzka overdosed Alex, took turns for hours waiting for him to die, and when he didn’t, Dorothy stabbed him four times in the chest with a kitchen knife, and slashed his wrist. They then cleaned the knife and put it back in the kitchen, and took pills themselves. Dorothy wrote, of Alex’s murder, that “Alex will no longer be treated like an animal,” but couldn’t even keep that meager promise herself. In addition to murdering Alex, “The women also allegedly killed their cat for fear he would be sent to a shelter,” according to Chicago’s ABC 7.

Attkissin follows her sanitized, excuse-riddled description of Alex’s brutal hours-long murder with this quote from Dorothy’s defense attorney, Michael Botti: “Every door closed. She had nowhere to go. Nowhere to take her son. There’s no help for him.”

These are the “explanations” that Attkisson and CBS News have explicitly endorsed, that Dorothy Spourdalakis really had no choice but to murder her son, an evil, but a lesser evil. (Again, this is beside the point, but the Division of Children and Family services says Dorothy was offered services, and she refused them.)

But the ultimate insult, to Alex and to journalism, is how Attkisson presents the lone voice of dissent to the necessity of Alex’s murder. Neither Attkisson, nor anyone else involved in this report, ever says that murdering Alex was inexcusable, and when she introduces the one person who does say that, Attkisson presents it as just another viewpoint, from a dude who probably has an ax to grind. “He leads a government-funded autism advocacy group,” Attkisson says, adding (emphasis mine) “He says lack of help is no excuse for murder.”

In over four minutes of reporting on how Dorothy had no choice but to murder her son, Ari Ne’eman, President of the Autistic Self Advocacy Network and the first presidential appointee with autism, is given twelve seconds to explain that “an ideology, a dangerous ideology that preaches that people are better off dead than disabled, is what led to Alex’s murder.”

Not for nothing, Attkisson conspicuously whitewashes her own sources’ dodgy backgrounds (more on that later), but takes pains to try and smear Ari Ne’eman’s group as a “government-funded” group, when ASAN is, in fact, a private non-profit that receives some government grants.

Attkisson concludes by offering comfort to other would-be murderers. “It’s not just Alex. a national survey found many doctors are uncertain as to what’s appropriate medical management for autistic children. Advocates hope this draws attention for the need for some change.”

Anchor Gayle King chimes in, at the end, “It’s a heart-breaking story, but she raises a good question. Maybe it will draw attention and help others.”

As I said before, even if all of the factual reporting in this piece were 100% accurate and honest, this is an unconscionable travesty. This report explicitly says that, while Alex’s murder is “extreme,” and maybe even “heart-breaking” (although it’s unclear if the heartbreak is at Alex’s murder, or poor Saint Dorothy’s ordeal), what else was she supposed to do, and maybe this story will help keep other autism parents from being forced to murder their children. It is sick, and very tangibly dangerous. I asked Ari Ne’eman for his reaction to the finished piece. Here’s what he had to say, via email:

“For years now, disabled activists have been working to fight back against the media presenting the killing of disabled people as understandable and our murderers as sympathetic victims. Unfortunately, CBS chose to perpetrate some of the most harmful tropes justifying the murder of disabled people in their recent segment.

The reality is that the Alex Spourdalakis case, like similar ones, was not about lack of support. On multiple occasions, Alex’s mother turned down access to services, turning instead to the psuedo-science peddled by discredited former physician Andrew Wakefield and others. What killed Alex Spourdalakis was an ideology that preaches that disabled people only have two viable options – cure or death. CBS chose the wrong side of that fight.”

There are millions of parents who care for disabled children, and do not murder them, but Ari is correct, there is a strong strain of martyrdom among some in the autism community for whom the main problem is how hard the condition makes things for those who care for people with autism. It takes just one of them sees this report, and decides that their suffering should also be ended by murdering their child, with the side benefit of drawing attention to how the world forces people to kill their own children.

I don’t want to go too far down the rabbit hole of Attkisson’s awful reporting, because I don’t want to distract from the main issue that there is no excuse for murder, but I will offer just two egregious examples. If you’re really interested in how far the rot goes, you can read more about it here.

Here is the first egregious, fatal omission by Sharyl Attkisson. Remember this guy from the report, described as “a gastric specialist in New York?” 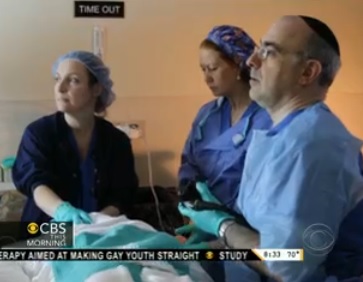 That guy is Dr. Arthur Krigsman. You might not know who he is, but Sharyl Attkisson surely must, because she has done extensive reporting on Krigsman’s wheelhouse. From Krigsman’s Wikipedia entry:

Arthur Krigsman, MD, is a pediatrician and gastroenterologist best known for his controversial and widely criticized research in which he attempted to prove that the MMR vaccine caused diseases, especially autism. He specializes in the evaluation and treatment of gastrointestinal pathology in children with autism spectrum disorders, and has written in support of the controversial entity of autistic enterocolitis. The original study that tied the MMR vaccine to autism and GI complaints conducted by one of Krigsman’s colleagues has been found to be fraudulent, and the diagnosis of “autistic enterocolitis” has never been widely accepted in the medical community.

Dr. Krigsman is part of the quack anti-vaccine movement, as is the documentarian, Polly Tommey. When Attkisson says that “no other facility would keep” Alex, and that “insurance wouldn’t pay” for Alex’s treatment, she’s using journalistic sleight-of-hand, because she never explains what treatment she’s referring to. Most reputable facilities and insurance companies won’t sign off on medically unproven treatments.

There is every reason to believe, though, that there was a place for Alex, away from his murderous caretakers. In May, Polly Tommey’s group posted a YouTube video from Alex’s bedside, in which a man named Andy Wakefield says that Alex “is destined, in the next 72 hours, to go to long-term psychiatric care, in an institution, in the absence of his mother and his godmother, without whom it’s going to be a very, very frightening experience,” and pleads with viewers to prevent this. Now, I don’t know a thing about Alex’s specific condition, or what diagnoses were being considered for long-term care, but whatever they were, that prospect was surely less frightening than being slowly poisoned and stabbed to death. Again, this is an inexcusable omission on Attkisson’s part, as this video was publicly posted by her own primary source.

By the way, if the name Andy Wakefield sounds familiar to you, you might have heard it on the news last week, when a North Texas church’s aversion to vaccines was blamed for an outbreak of the measles. Andy Wakefield is the man whose fraudulent 1998 paper started the whole anti-vaccine movement.

Based on these omissions alone, there is no reason to believe anything that Attkisson reports about the lack of help available to Dorothy Spourdalakis, which is irrelevant anyway, because you still don’t get to murder your child. If CBS News agrees that there are choices preferable to murder, they need to send that message by completely, conspicuously retracting this report. This is journalistic harm at its most egregious, and there aren’t enough autism parents and people with autism to force CBS to do the right thing. It will take an act of conscience. The media was outraged when an anonymous letter-writer encouraged the euthanization of an autistic child. Let’s see how they react to the same thing from one of their own.

Editor’s note: The author of this piece is the father of two children with Autism Spectrum Disorders.