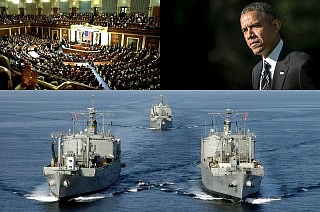 The libertarian wing of the GOP has taken the initiative. Their socio-economic prescriptions quietly routed the Republican Party’s “compassionate conservatives” at the dawn of the Obama-era. Today, this faction’s views on global security policy are fast becoming the dominant foreign policy doctrine of the GOP. President Barack Obama’s push for intervention in Syria may come to be looked upon by posterity as the moment when the libertarian wing’s philosophies began to characterize the party for a decade or more.

Certainly, many Republicans – and Democrats, for that matter – have informed and principled reasons to oppose intervention in Syria. But politicians also tend to be adept readers of the political landscape, and the landscape today does not favor Obama’s position on intervention. Presently, the political circumstances favor opposing Obama. The history of the Republican Party would indicate that the GOP should support enforcing the international norm prohibiting chemical weapons use flagrantly violated by Syria’s Bashar al-Assad. Not merely is this president’s credibility at stake, but the credibility of future administrations. Apparently, minding the party’s political appeal trumps principled support for long-standing American foreign policy objectives.

When President Obama announced over Labor Day weekend that he planned to seek Congressional approval for intervention, he was deferring to public opinion (which shows an overwhelming majority of Americans favor bipartisan legislative approval for a military strike). But Obama was also, without saying as much, deferring to the War Powers Act – a piece of legislation which every president since President Richard Nixon has regarded as unconstitutional.

Congressional Republicans have historically agreed that the War Powers Act is an unnecessary and dangerous abridgement of the presidential authority to launch military action in defense of American interests. They did, at least, until 2011, when the president took the nation to war in Libya in defense of the unconvincing principle of the West’s “right to protect” civilians from a murderous dictator.

A bipartisan group of lawmakers applauded Obama’s decision to head to Congress to seek authorization for intervention. In the same breath, many declared their intention to withhold that authorization – affirming why past presidents have regarded the War Powers Act to be an invalid expression of Congressional authority. If a vote is put to Congress prematurely and it fails as a result of Republican opposition, that dubious precedent will haunt the party for generations.

Not merely the Congress, but the public, too, is deeply skeptical of what intervention in the Syrian civil war can accomplish. Even if the administration had presented to the public a credible and circumspect policy on intervention, the people would be difficult to convince. But Obama’s White House has sent a clear and early signal that they had no interest in rising to meet the test of Syria’s use of chemical weapons on civilians – the first such case since the end of the Cold War and the rise of America as the world’s lone superpower. Who can blame the public and their representatives for their skepticism?

An NBC News / Wall Street Journal poll last week showed that only 42 percent of Americans back the use of military force to punish Assad’s regime for using chemical weapons. 50 percent support intervention if the means of force is limited only to cruise missiles and drones – that is to say, when Americans have virtually no skin in the game and can only narrowly impact the situation on the ground in Syria.

As The Wall Street Journal’s Neil King Jr. observed, since President Ronald Reagan attacked Granada in 1983 presidents have had the support of a narrow majority of the nation prior to intervening in a foreign conflict. Indeed, ensuring that the public supports a military intervention before engagement is a key pillar of the Powell Doctrine.

The president bungled the run-up to Syrian intervention in a staggeringly inept fashion. Rather than spending the three months since his administration first confirmed Assad had crossed his “red line” making the case for intervention with the public and America’s representatives, but he also failed to make the case with America’s allies abroad. Taking for granted British support for American military initiatives abroad, MPs raced to parliament to cast a rushed vote authorizing only the most preliminary step toward intervention last week. For the first time since the American Revolution, the British public denied the government the right to use military force abroad. America’s traditional geostrategic adversaries in Moscow and Beijing are even less friendly to Washington’s policy objectives on the world stage.

Republicans, traditionally mindful of the game which great powers play – the only historical constant which governs international relations – would, in another time, be mindful of providing America’s erstwhile allies and perennial adversaries a propaganda victory by withholding support for the president. But the politics of the moment, again, appear more tangible to Republicans in Congress.

Republican opposition to Obama’s preferred initiative in Syria enjoy the cover of some legitimate problems with this administration’s inept preparation and weak strategic vision. But the time for preparation has passed and a punitive strike, not regime change, is all that is in the offing. Because this president is unable to lead does not give Republicans an excuse to abdicate their role as stewards of America’s interests abroad. Before this week, only a handful of lonely voices within the Republican Party have nobly taken the unpopular position and supported Obama in public. Often, they made a stronger case for America’s interest in intervention in Syria than Obama ever did.

Today, House GOP leaders like Reps. John Boehner (R-OH) and Eric Cantor (R-VA) have dropped their reticence to support Syrian intervention and are now supporting the president’s position. For some, the pressing urgency of the moment outweighs temporary political benefit. Too many in the GOP are still, however, pursuing a politically popular strategy over the correct one.