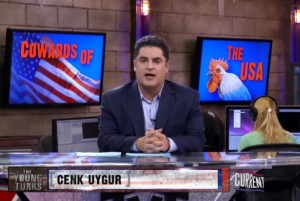 First, it was Mitt Romney having “fun getting to know Ted Nugent,” but now, the rest of post-Mesozoic America is getting to join in. On last night’s The Young Turks, host Cenk Uygur detailed one more fascinating chapter in the tough-talking rock dinosaur’s past: his avoidance of service in Vietnam. Uygur recounts the explanation Nugent gave in 1977, dubs him “coward” about 18 times, and crowns him “The Weakest Man In America.”

While that sounds like a great ad campaign for Dos Equis (“He has a seat belt…in his sex swing. Drug dealers cut cocaine with him. He wears body armor to play lawn darts. When he gets an erection lasting more than four minutes, he doesn’t call his doctor, he calls everyone. He is…The Weakest Man In America.”), I doubt Nugent would be pleased with the title. The entirety of his post-rock career is wrapped up in the idea that he’s a hyper-macho he-man who wants one special man to suck on his guns.

That false bravado is undercut by the account he gave of how he avoided the Vietnam-era draft. In 1977, he told an interviewer that he “got 30 days’ notice of the physical. I ceased cleansing my body. Two weeks before the test I stopped eating food with nutritional value. A week before, I stopped going to the bathroom. I did it in my pants. My pants got crusted up.”

It’s this story that Uygur recounted last night, but in fairness to Nuge, he did have the good sense to deny it years later, when being a pants-shitting coward was no longer fashionable:

“I never shit my pants to get out of the draft,” says Nugent, good-naturedly.

“You also told them you took crystal meth [methamphetamine, the highly destabilising drug sometimes described as poor man’s crack] before the medical – as a result of which, and I quote: ‘I got this big juicy 4F.'”

“Unbelievable. Meth,” he replies, in a tone of deep sarcasm. “Yes, that’s my drug of choice. You’ve got to realise that these interviewers would arrive with glazed eyes and I would make stories up. I never did crystal meth. And I never pooped my pants.”

“But you did dodge the draft.”

“I had a 1Y [student deferment]. I enrolled at Oakland Community College.”

“You said then that you wanted ‘to teach the stupid bastards in the military a lesson’. I’d have thought you’d have loved the army. Guns. Travel. Danger.”

“Back then, I didn’t even understand what World War II was.”

“So basically,” – I admit that I have, unaccountably, started to speak Nugent – “you didn’t want to get your Michigan ass blown off in Vietnam.”

“Correct. I did not want to get my ass blown off in Vietnam.”

To be clear, no one could reasonably blame Nugent for not wanting to get his (crusty or not) ass blown off in Vietnam, or elsewhere, but then, you kinda give up the right to run your mouth while standing on the shoulders of those who did.

Weakest man in America? That’s a stretch, but refusing to even back up your own weak-ass shit-talking is pretty damn weak. Smart, though, because if he didn’t crap his pants to get out of Vietnam, he just might when the Secret Service comes calling. Stay fecally incontinent, my friend.