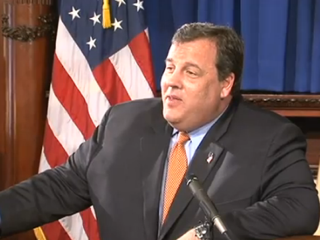 It is the cross that all people from New Jersey must bear that, at some point in your public life, someone will question your level of appreciation for guitar-wielding legendary rock mumbler Bruce Springsteen (incidentally, this is why I can never run for office). Governor Chris Christie is not immune to such accusations of blasphemy, as someone snapped a photo of him with his eyes closed during a Springsteen concert at Madison Square Garden last week. Sensing the depths of this potential scandal, the Christie administration immediately went into damage control to clarify that he was not, in fact, sleeping, but having a “spiritual” moment with the greatness of Springsteen’s tunes.

No, really, this happened in a press conference in New Jersey: lamenting the “level of intrusiveness in my life,” Christie complained that “some joker taking pictures of me in Madison Square Garden” caused this scandal, without realizing what he was photographing. “During ‘Rocky Ground,’ which is a pretty spiritual song, people sat. So I sat up on my seat, leaned my head back, closed by eyes,” he explained. He added that he did many other embarrassing things, like “fist-pumping during ‘Badlands'” and “contorting myself to ‘Because of the Night,'” but no one took his photo.

He also explained that the confusion about his slumber became greater after Springsteen “did a little speech about the robber barons and the 1% and all the typical Bruce stuff,” and someone shouted out “wake up, governor!” “The guy was asking me to wake up politically,” he explained, but the “joker” taking the photo conflated the two events.

In other, less important news, New Jersey is still around $92 billion in debt.