Chris Hayes On His Argument With Giuliani This Week: Giuliani Was Right. But…
Video

Chris Hayes On His Argument With Giuliani This Week: Giuliani Was Right. But… 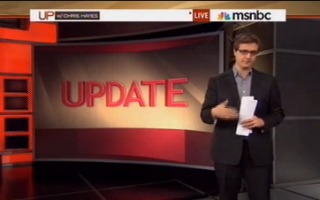 While wrapping up Saturday morning’s Up with Chris Hayes, host Chris Hayes took a moment to address a heated discussion he’d had with former mayor Rudy Giuliani earlier in the week. During MSNBC’s Wednesday night debate coverage, Hayes and Giuliani had entered into an argument, with Hayes asking Giuliani whether contracts his consulting firm secures with government count as “feeding the beast.” Giuliani felt Hayes was making a personal attack, adding that his firm did not make contracts with the Department of National Security.

“Well, we checked,” said Hayes, “and the truth is I vastly overestimated the amount of direct government business Giuliani’s firm, Giuliani Bracewell [Ed. note: It appears — and correct me if I’m wrong, readers — that Giuliani’s consulting firm is called Giuliani Partners LLC. He is also, however, a partner at the Texas-based law firm of Bracewell & Giuliani.], does with the federal government. The Mayor was right that his firm has no contracts with the DHS or the federal government. A Giuliani representative told us yesterday that his firm is also not pursuing any federal contracts either for itself or any of its clients.”

“But while he was correct he never had a contract specifically with DHS,” Hayes continued, “it is true, in 2002, his consulting firm received a $1.1 million contract from the Justice Department. Given how much revenue Mr. Giuliani’s firm brings in, that hardly represents a major part of its business, but it’s not nothing either.” But Giuliani, he said, isn’t really the main point here:

I raise the issue because Mr. Giuliani, Mr. Romney, and most Republicans draw this sharp line between the virtuous private sector and the vicious and predatory public sector while at the same time advocating for $2 trillion more in defense spending. The same party that preaches government is wasteful and bureaucrats useless has also overseen the creation of a vast, largely privately-contracted world of surveillance and security that provides a whole lot of private sector jobs and healthy paychecks from the taxpayer dime.

We shouldn’t pretend that the public and private sector exist in two different worlds. The overlap is increasing and there’s a good lot of private profit to be made by navigating the borders between the two. I can appreciate Mr. Giuliani was taken aback that I broached the ostensible topic at hand with the debate.

Hayes then extended an invitation to have Giuliani on his show to discuss the issue further.