Fox’s Chris Wallace: If Ron Paul Wins In Iowa, It Will Discredit The Iowa Caucuses 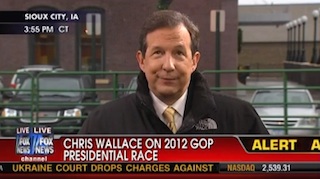 With the Iowa caucuses right around the corner, some people are saying that the victor may actually end up being Ron Paul. Yeah, you know, the guy who’s had steady numbers in the polls this whole time despite some people seeming to want to ignore that fact. So, what does that mean if he wins? Well, according to Fox News’ Chris Wallace, it will “discredit the Iowa caucuses.”

Huh. Well, at least people are talking about you Ron.

Wallace’s comment came during an appearance, from Iowa, on Your World with Neil Cavuto. Cavuto asked Wallace what he thought the takeaway would be from a Ron Paul victory.

“Well, and the Ron Paul people aren’t going to like me saying this, but, to a certain degree, it will discredit the Iowa caucuses because, rightly or wrongly, I think most of the Republican establishment thinks he is not going to end up as the nominee. So, therefore, Iowa won’t count and it will go on.”

There’s a moment, right as Wallace begins to answer the question, where hesitates for a second and then looks right in the camera. In that moment, you can see a man realized he’s about to incur the wrath of half the Internet, think about it, and then proceed to say what he was thinking anyway.

One could say that Wallace just meant it would discredit the caucuses in other people’s eyes, right? Right?

UPDATE: It should also be noted that Wallace will be one of the moderators at tomorrow’s Fox News debate in Iowa.