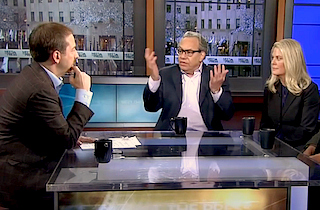 Riffing off a piece by Salon’s Elias Isquith that argued that “The Daily Show tends to inspire glib cynicism more than outrage or understanding,” Meet the Press host Chuck Todd asked a troika of comedy professionals Sunday morning whether they found an ironic response to politics detrimental to increased engagement in it.

“You could say we’re somehow dumbing down something that’s been dumbed down over the course of my life,” responded man-ashtray Lewis Black. “We’ve moved closer to living at the corner where satire and reality intersect.”

Black said the oversaturation of news almost immediately deprives an event of its initial shock and quickly renders it into material. “You hear these people say the same things over and over; the first time you go, ‘What?!’ by by the third time a politician says something, you’re laughing.” (Comedy writer Laura Krafft countered that the increased accessibility of political news made for a more informed citizenry that could more readily appreciate smart humor of the Daily Show variety.)

W. Kamau Bell said comedy was a bulwark against actual, IRL cynicism. “Have you been on Twitter, on Facebook?” he asked. “The cynicism is there. If anything the Daily Show gives you hope.”

The panel roundly agreed that comedy can be more successful at puncturing narratives because, as Todd put it, they don’t have to worry about nobody coming on Meet the Press if they do so. “Comedy gets to bark,” Bell said. “But the weird thing is Fox News also gets to bark. Sometimes the left-learning media is afraid of barking. So they play a clip of The Daily Show.”