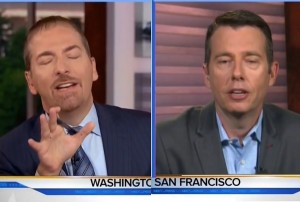 On NBC News’ Meet the Press Sunday morning, a former top political adviser to President Obama was chided for calling Republican presidential nominee Donald Trump a “psychopath.” David Plouffe, who was chief strategist of the Obama 2008 and 2012 presidential campaigns and a one-time senior White House adviser, earned a rebuke from MTP host Chuck Todd for observing that Trump “meets the clinical definition” of a “psychopath”:

DAVID PLOUFFE: Well, those are two tough states. I think they were uniquely suited to Barack Obama. And I think so when we had that conversation I think the assessment was that Donald Trump would try and do some things to appeal to the middle of the electorate, to appeal to suburban college-educated women. He’s not. I mean, basically, we have a psychopath running for President. I mean, he meets the clinical definition, okay? Hillary Clinton–

CHUCK TODD: Do you really think, diagnosing people on air, I assume you don’t have a degree in Psychology. Is that fair? I mean–

CHUCK TODD: –we’re jumping to conclusions here, I think this is what gets voters a little frustrated with this campaign.

DAVID PLOUFFE: Well, you know, listen, the grandiose notion of self-worth, pathological lying, lack of empathy and remorse. So I think he does, right, I don’t have a degree in Psychology.

It is also unclear whether Plouffe knows karate, but from his response to Todd, it appears he maintains that he does know ka-razy.