CNBC Anchor: ‘I Wasn’t Praising the Dems’ with My Anti-GOP Rant 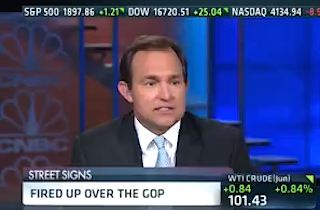 Brian Sullivan, the CNBC anchor who caused a minor firestorm when he delivered an extended anti-Republican rant on Morning Joe Tuesday, attempted to clarify his comments on his own show, Street Signs, this afternoon. Just because he was attacking the GOP does not mean he was “praising the Dems,” Sullivan said.

“When I look at all of the different social issues, I would be willing as a voter to sacrifice a bad economic policy — or one maybe I didn’t agree with — if it was better than some big social agenda I cannot get on board with,” Sullivan said. “And I know a lot of people that have been faced with the same decision. That’s the point I was trying to make.”