CNBC Anchor Loses It: ‘I Don’t Know Who the Republican Party Is Anymore’ 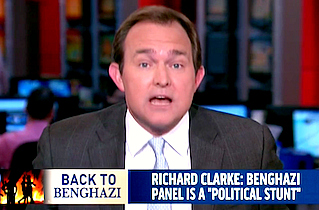 CNBC anchor Brian Sullivan made sure his appearance on Morning Joe this morning counted, passionately declaiming against the Republican Party for pushing non-religious moderates like himself out.

This occurred amidst a discussion about the media coverage of Benghazi. Sullivan noted that his parents were conservative and often lamented the press’ supposed disinterest in the story. But from there, he had nothing good to say about the GOP.

He very much continued:

“As someone pretty much not religious, pro-same-sex marriage, pro-legalization of marijuana for the most part — what party is this? What party am I supposed to be in? When I’m a fiscal conservative who believes that small government can often be better — there are times for larger government.

The rest of the panel, which comprised a good amount of the employees at 30 Rock, expressed their wonder at Sullivan’s outburst thusly: “You just booked a ticket to New Hampshire!”