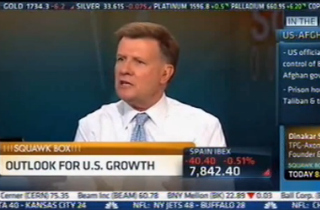 Burnett had said on her show Friday evening that commodity prices have spiked since November 2008 because of the Federal Reserve’s policy of “quantitative easing.” In a HuffPost fact-check article aimed at “debunking” Burnett, Baker and Krugman were cited.

“They quoted Paul Krugman and this other idiot, Dean Baker, who’s some guy, I don’t even know who he is, he always writes for The Huffington Post. Basically co-communists in a lot of different economic circles,” Kernen said.

The outspoken host also tore into the idea of bloggers fact-checking on complex economic issues: “You know, fact-checkers need fact-checking now. They’re so full of crap. These fact-checkers lie more than the people that they’re fact-checking,” he said, adding that, “In the blogosphere, you can write what is libelous, you can lie and it’s taken as fact by the readers.”

CNBC reporter Steve Liesman agreed: “I get concerned when people who are not economics reporters, they get involved. Like when the White House guys start writing about economics, it makes me nervous.”

In the past, Kernen has told Krugman, on-air, that he reminds him of a mystical “unicorn,” and another time Kernen and a panel of economists mocked the NYT writer for his “laughable” ideas.