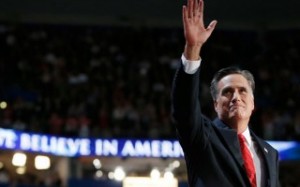 Recently, one criticism of Mitt Romney has focused on his and his campaign’s shying away from offering specifics about his economic policy proposals. Asked about his plan to close tax loopholes and address the country’s health care problem, Romney vowed he would, but offered vague answers. Today, the Wall Street Journal‘s editorial page also took a stab at Romney’s responses on his Meet the Press interview.

RELATED: Mitt Romney: ‘Number Of Things I Like’ In Obamacare ‘That I’m Going To Put In Place’

The subtitle on the piece captured its sentiment in a nutshell: “The GOP candidate might try explaining his policies. Just a thought.” The Meet the Press interview, the WSJ noted, “made his own policy sound worse than it is.”

The editorial page’s thoughts (via POLITICO):

When Mitt Romney ventures into health care, political trouble usually follows. So it went this weekend, as the GOP standard-bearer made his own policy sound worse than it is.

On NBC’s “Meet the Press,” the Republican was asked what he would do about people with pre-existing medical conditions who would supposedly “no longer be guaranteed health care” if he repeals the Affordable Care Act. “I say we’re going to replace ObamaCare,” Mr. Romney replied. “And I’m replacing it with my own plan,” without defining the substance of his own agenda.

When pressed, Mr. Romney said that “I’m not getting rid of all of health-care reform. (That would be the liberal euphemism for ObamaCare.) Of course, there are a number of things that I like in health-care reform that I’m going to put in place. One is to make sure that those with pre-existing conditions can get coverage.”

Whether or not this rhetorical gambit was driven by polling, it did confuse political reporters who think that the only two “health-care reform” choices are ObamaCare and the pre-2010 status quo. They were soon filing stories about a Romney “move to the middle.” Meanwhile, certain quarters on the right—equally unversed in policy—went bonkers, while liberals gloated about a flip flop.

Based on our reading of Mr. Romney’s policies, he should have said something like this: “I support President Obama’s goal of making sure sick people can get insurance. But the wrong way to solve this problem is a new entitlement we can’t afford, a vast increase in government control over medicine, and drastic health-care changes for the other 300 million Americans.”…

…Mr. Romney’s pre-existing political calculation seems to be that he can win the election without having to explain the economic moment or even his own policies. As this flap shows, such vagueness carries its own political risks.