CNBC Reporter Challenges Ted Cruz: Why Should Anyone Listen to You When Your Facts Are Wrong? 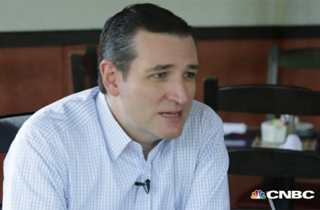 In an interview with CNBC, GOP presidential candidate Ted Cruz expressed anger towards the “left-wing editorial writers” who liked to call him out for making “non-factual statements.”

Cruz, speaking to John Harwood during a ten-question interview, dismissed the tendency of people to do things like fact-check his claims supporting his argument that the IRS should be abolished:

HARWOOD: You’ve said a few things that don’t necessarily comport with the facts, like, “125,000 I.R.S. agents, send ’em to the border.” They’ve only got 25,000 agents or something like. You’ve talked about the job-killing nature of Obamacare. We’re adding jobs at a very healthy clip right now. Why shouldn’t somebody listen to you and say, “The guy’ll just say anything – doesn’t have to be true”?

CRUZ: There is a game that is played by left-wing editorial writers. It’s this new species of yellow journalism called PolitiFact. Colloquially I was referring to all the employees as agents. That particular stat is in a joke I used. So, they’re literally fact-checking a joke. I say that explicitly tongue in cheek.

Okay, time to fact-check the statement that Cruz made a joke that shouldn’t be fact-checked! The claim in question was made during a speech in New Hampshire, and according to the Concord Journal, here’s the exact quote:

“Now look, I say that somewhat tongue-in-cheek -– but think about it for a minute. Imagine you’ve traveled thousands of miles in the blinding sun, you’re dripping wet, you swim the Rio Grande and the first thing you see is 110,000 IRS agents? You’d turn around and go home too.”

Point 1: Cruz clearly made a joke, and it was “explicitly tongue in cheek.”
Point 2: The joke, however, was about an over-the-top thing Cruz wanted to do with the IRS.
Point 2(a): The number of IRS agents was not implicated in the joke-making, and thus seemed like a plausible number of agents that could exist.
Point 3: Even if he defined “agents” as “all employees of the IRS,” the number is still off: The IRS had roughly 90,000 employees as of 2013, and is actually facing a staffing shortage.
Point 4: Cruz could have made the joke without sacrificing accuracy — 25,000 agents is still a lot of agents, enough to make a joke argument that one should abolish the IRS. But 110,000 agents is on a completely different magnitude than 25,000; and while it’s not OMG FALSEHOOD level of bad, it’s a worrisome tendency towards embellishment.
Alternative Point 4: Cruz needs new joke writers?
Alternative Point 4(a): This is getting pedantic.

Watch below via CNBC: