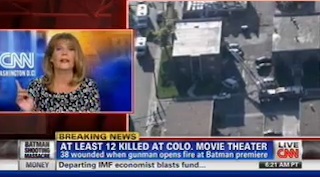 Thirteen years ago and around 25 miles from the spot where 24-year-old James Holmes brutally murdered a dozen people last night, the state of Colorado was hit by another shooting, one of the worst in our nation’s history. This, of course, was the shooting at Columbine High School. In the lengthy aftermath of that shooting, the media, parent groups, and political figures all rushed to point a finger anywhere they could, frequently blaming pop cultural elements like violent video games or aggressive musicians. It would look like we may be heading down that path again as a CNN guest has already began casting aspersions on video games.

A few hours ago (9am EST), criminal profiler Pat Brown was brought on the air to discuss anything that could be gleaned about last night’s killer so far. As not much information was readily available, Brown was forced to theorize, guessing that, for Holmes, last night was the best night of his life and one that he had planned extensively for. She also guessed that this planning may have involved repeatedly playing violent video games.

“This has been something he has really been into. And now we’re going to find, probably on facebook or anybody who knows him will say, ‘Yeah, he did have a lot of interest in that. He was always playing the video games. And I’m not saying video games make you a killer. But if you’re a psychopath, video games help you get in the mode to do the killing. So it is a problem in our society with teenaged psychopaths, that they do get inspired by this and want to make it real. So it is a danger but it doesn’t make you a psycho.”

It is important to note that Brown was very cautious in stating that video games don’t “make” people like Holmes. She was just making an educated guess that he played video games based on experience. She is likely right (statistically, if he’s a 24-year-old young man, he’s probably played video games). That being said, based on the mass hysteria that followed Columbine and any number of other shootings in our country, we should really be careful about who we blame, be they a public figure, a political movement, or a game.

UPDATE: The original version of this post incorrectly identified Brown as a “CNN contributor.”

Watch the video from CNN below: