CNN Group Explodes At Guest Who Defended Clinton’s DOMA Reversal: ‘I Like’ When ‘Politicians Flip-Flop’
video

CNN Group Explodes At Guest Who Defended Clinton’s DOMA Reversal: ‘I Like’ When ‘Politicians Flip-Flop’ 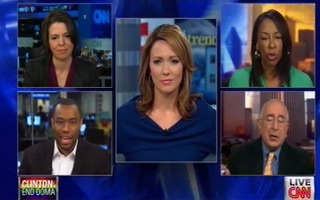 On Friday, a CNN panel discussed a recent op-ed by former President Bill Clinton in which he urges the Supreme Correct what he regards his mistaken decision to sign the Defense of Marriage Act into law. Many of the panel guests, both liberal and conservative, thought that Clinton’s actions were merely his effort to salvage his legacy, but one guest said she thought Clinton had organically come to realize his mistake. “Why are we trippin’ when politicians flip-flop? I like that,” she said. The panel collectively exploded at her.

“One, he didn’t change his mind, and, two, he didn’t have to do it – he could have vetoed any bill that was going over his desk,” said Marc Lamont Hill of Clinton’s decision to sign DOMA. “He did it because he wanted to. Because, like all Clintons, he did what was in his best interest.”

“Why are we trippin’ when politicians flip-flop? I like that,” declared radio host Dede McGuire. “I like knowing that you’re not perfect and it’s either black or white.”

McGuire said that it takes a “big man” to admit their wrong.

“Everybody acts like there was no such thing called ‘I was wrong,’” McGuire continued. She went on to say that she met a couple who changed her mind about gay marriage rights. “You guys act like it’s a bad thing.”

Ben Stein found the entire conversation ridiculous. After noting that the world had changed dramatically since 1996, and Clinton was influenced by the world around him – he did not have a spontaneous revelation that made him warm to gay marriage. “He’s a politician, for God’s sake,” Stein remarked. “He’s not a saint. He’s not a pope. He’s a politician.”