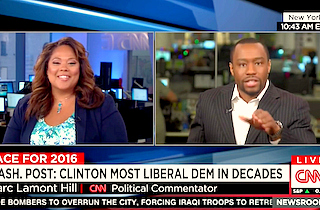 CNN contributor Marc Lamont Hill and TheBlaze scribe Tara Setmayer have become one of the cable news network’s most reliable argument batteries, and Monday morning they went at it over Hillary Clinton in a segment that devolved into twin accusations of sexism.

Setmayer lit the tinderbox by claiming Clinton is only a viable candidate because of her husband: “Her strong point is that her last name is Clinton and that she has a husband that people adore.”

Therein began a debate over Clinton’s accomplishments as Senator and then Secretary of State, which Setmayer listed as non-existent and Hill argued were “significant.”

“To say that the secretary of state and former senator has nothing going for her but her last name to me reeks of sexism,” Hill said.

The two also sparred over Clinton’s wealth, which Setmayer had said sat poorly next to Clinton’s everyday woman-style campaigning.

“Hillary Clinton’s policies toward the middle class are troublesome, I critique Hillary Clinton for that,” Hill said. “I haven’t seen a presidential candidate yet that has chance of winning that also isn’t rich.” Hill argued that Setmayer should at the very least she should critique the wealth of the Bush and Mitt Romney, who pair their fortunes with policies that further benefit the rich.

“The difference is we don’t use class warfare as a political tactic,” Setmayer said, meaning conservatives. “I don’t have a problem with Hillary Clinton making money.”

“You’re the one who brought it up!” Hill replied. From there things got yelly, and included a crash course in how to read Bureau of Labor Statistics data, which ended with Setmayer calling Hill sexist for suggesting she couldn’t interpret government statistics.