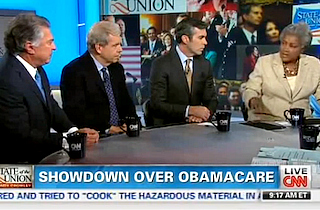 Following House Minority Leader Nancy Pelosi’s condemnation of the House GOP as legislative arsonists, a CNN roundtable debated the wisdom of the GOP’s strategy to threaten government shutdown over ObamaCare funding, arguing that despite the law’s unpopularity, Republicans were ceding their political advantage by trying to defeat it.

“If can you go out and find me a bunch of Americans who sit around their table saying let’s defund ObamaCare, that’s a family I want to meet,” said Joe Lockhart, in response to Al Cardenas’s statement that Americans wanted ObamaCare defunded. “This is a Washington creation.”

“It’s not that much different than the past where Republicans had their message, Democrats have theirs,” Lockhart continued. “The problem here for the Republicans is they’re pursuing the exact wrong tactics, which is, they’re going to go shut down the government. The government is this sort of amorphous thing. People take it for granted, they don’t sit around and thank the government every day because the road is built. But when you shut it down, and you start telling troops they’re not going to not get paid, when you start kicking people out of Yellowstone Park, people remember: government is essential to their daily lives.”

“This is not about defunding ObamaCare,” Cardenas said. “ObamaCare’s already been in the marketplace. People’s insurance rates are going up 20%, 30%, 40%, 50%—”

“That’s not true,” Donna Brazile interjected. “Over 100 million person have already experienced the benefits of ObamaCare. Whether it’s young people remaining on their parents’ plan or it’s women with pre-existing conditions can now go out and get the kind of medical help they need. This is all about the Republicans not having a plan. Republicans are raising money on this ‘defund ObamaCare.’ You’re not solving the problem.”

“Why do you think President Obama, who ran for president in 2008 on this platform and again in 2012, won overwhelmingly?” Lockhart asked. “All this talk about the marketplace and rejection of Obama and defunding, it’s not true. This has gone through the ballot box several times. It’s gone through the courts. Republicans can’t let go. And that is going to be the seeds of their own destruction.”