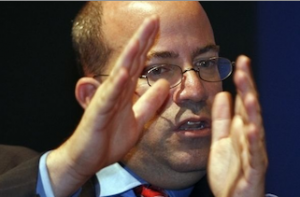 At the end up one of the busiest news weeks in recent memory–for CNN and every other major media organization–Jeff Zucker delivered his gratitude to his CNN staff in an internal memo obtained by POLITICO’s Dylan Byers.

Beginning with the declaration, “What a week,” Zucker goes on to praise his team for their “exceptional work.” He wrote, “It was important to see CNN, CNN.com, HLN and CNNI all shine this week,” and let the full staff know, “you have shown the world what makes us CNN.”

Read the full memo below:

As events unfolded in Boston, and then in Texas, and as they continue to unfold at this very moment in both places, CNN has been there for our audience in every possible way – on television, online and on our mobile platforms. As Wolf would say, that was true for our audiences here in the United States and around the world. For journalists like each of us, these are the times that define what we do and why we do it. All of you, across every division of CNN Worldwide, have done exceptional work. And when we made a mistake, we moved quickly to acknowledge it and correct it. It was important to see CNN, CNN.com, HLN and CNNI all shine this week, often with different stories and different approaches that make each of their roles clear. It is a week that began with a whole new genre of programming for CNN, with the successful premiere of Parts Unknown. Now, as the week comes to a close, I wanted to express my deep gratitude and admiration. You have worked tirelessly, around the clock, to share these stories. And our audiences have responded, making it clear that they rely on us in ever increasing ways. In front of the cameras and behind the scenes, you have shown the world what makes us CNN.

With my thanks and appreciation,

CNN stood out as one of the several media outlets to falsely report the arrest of a suspect in the Boston Marathon bombing investigation long before the FBI had even released photos of the two alleged bombers. Reporter John King compounded the problem when he described said-suspect as a “dark-skinned male,” a description he claims he got from multiple official sources, but turned out to be unfounded.

The Daily Show‘s Jon Stewart gleefully took down CNN’s “completely fucking wrong” Boston reporting Wednesday night, calling them the “human centipede of news.” He even worked in a subtle, personal dig at Zucker, saying, “as one of their competitors, I guess we just get a little jealous.”

That joke from Stewart was in reference to comments Zucker made earlier this week, in which he said, “Just because Jon Stewart makes fun of it doesn’t mean he’s right” and indicated that as a “competitor” perhaps Stewart was just “jealous.”

In case you missed it, watch Stewart tear into CNN below, via Comedy Central: