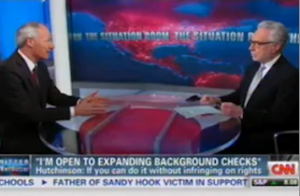 “Obviously we think it’s important to make sure that firearms do not get in the hands of people who are criminals, convicted felons, or adjudicated as mentally ill,” he said. But he insisted that his “mandate” has more to do with “school safety issues” rather than the larger issues of who has access to guns.

UPDATE: According to CNN National Political Correspondent Jim Acosta, Asa Hutchinson has attempted to clarify his comments in an email to CNN: