Did Conan O’Brien use jokes in his late night monologues that were stolen from a guy who posted late night monologue-style jokes online? That is the assertion in a lawsuit filed last week by a San Diego man named Robert Alexander Kaseberg, who appears to blog and tweet under the name Alex Kaseberg.

As first reported by The Hollywood Reporter’s Eriq Gardner, the lawsuit cites a handful of jokes that Kaseberg alleges he wrote and posted online before O’Brien delivered them on his late night show. For instance, a blog post dated January 14, 2015 included the joke, “A Delta flight this week took off from Cleveland to New York with just two passengers. And they fought over control of the armrest the entire flight.”

That same night, O’Brien told a nearly identical joke during his monologue: 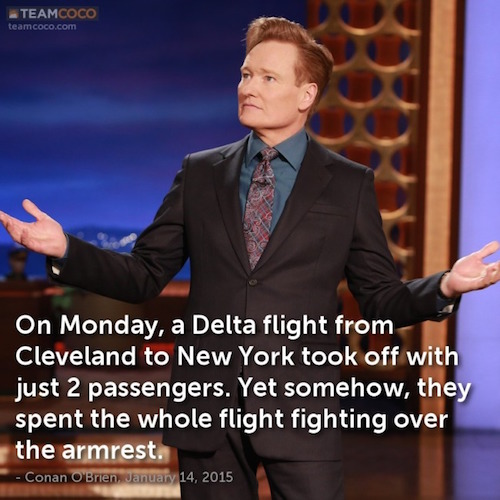 The following month, Kaseberg wrote a post on his blog outlining further instances in which he claimed O’Brien had stolen his jokes. In addition to the Delta joke, Kaseberg cited jokes he claims he made about Tom Brady and the Washington Monument that appeared on Conan hours after he posted them online. However, those jokes to not appear in searches of his blog or Twitter history.

In his February post, Kaseberg recounted a phone conversation he had with Conan head-writer Mike Sweeney:

For what seemed like 15 agonizing minutes, Mike Sweeney, the head writer of “Conan,” angrily and loudly denied those were my jokes. He was furious that I was accusing them of stealing jokes, but most of all he was incensed that I would suggest his writers would have anything to do with my pathetic blog and it’s author, me, a no-name failure.

At one point Mike Sweeney said, after he got my message, he went on my blog and he saw the jokes, but they were not the jokes used for “Conan.”

(It was almost impossible to get a word in sideways, that is how agitated Mike Sweeney was)

In my defense, I told Sweeney I had contributed to Jay Leno for over 20 years, and many other TV and radio shows. Over and over I tried to explain I did not want trouble, I just wanted to contribute jokes to their show. These three amazingly similar jokes, I thought, were a great example of our shared sensibilities.

“We don’t have any openings,” said Sweeney, “and why would I want to hire someone who accuses us of stealing jokes?”

Mike Sweeney implied I had heard jokes on TV and wrongly assumed they were mine. Like I was some crazy man whose thoughts were being stolen by a TV show.

To be told by anyone you’re a failure as a comedy writer hurts. To be told you’re a crazy failure by the head writer of one of your comedy idols is much worse. It is devastating.

Kaseberg went on to write that he considered “litigating” but decided against it. “In the back of my mind I hoped a Brian Williams-like in-house investigation would be launched inside ‘Conan’ and I would be vindicated,” he wrote. “But that never happened.”

According to Kaseberg’s legal complaint, he is seeking hundreds of thousands of dollars in damages. But it will likely be an incredibly tough case to make based on old blog posts, which can easily be edited after the fact using Google’s Blogspot platform.

OH NO WE'VE BEEN FOUND OUT!!