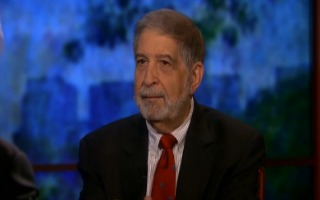 Former Congressman Mickey Edwards (R-OK) slammed Grover Norquist‘s anti-tax pledge, along with the many Republican politicians who have signed it, telling Bill Moyers, “That’s childish.” He denounced the idea that an anti-tax pledge was a hallmark of conservatism, saying, “it’s not rational” and “it’s not adult.”

Edwards was a member of Congress from 1977 to 1993 and helped mold the modern conservative movement. He chaired the Republican Policy Committee and was national chairman of the American Conservative Union for five years. He also advised Ronald Reagan on his 1980 campaign for the presidency.

According to Edwards, Republicans are “as responsible as the Democrats for the debt being as large as it is,” and everyone has “an obligation to pay it down”:

Moyers told Edwards that Norquist often states he created his anti-tax pledge at the age of 12 and suggested that Norquist may still be in a state of “arrested development.” Edwards then responded, “Well, you know, the fact is, the idea that, you know, ‘No, I’m not ever going to do this no matter the circumstances, no matter if we’re at war,’ whatever, it is a 12-year-old kind of thinking.”

Watch the full clip below, via PBS: