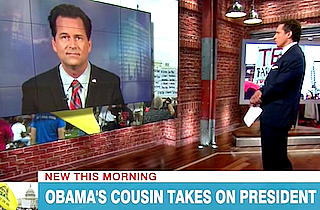 On Thursday morning New Day host Chris Cuomo questioned Milton Wolf, a candidate in Kansas’ GOP Senate primary who claims a tenuous familial connection with President Barack Obama, on past transgressions (ahem, posting patient X-Rays on Facebook, ahem). Cuomo accused him of being hypocritical when he said he wanted to avoid personal attacks even after he recently compared Obama to Hitler, noting that “for someone who is not a politician” he sure was slipping questions.

Wolf, a radiologist, got into trouble a few months ago when it was discovered he was mocking his patients’ X-Rays on social media. When Cuomo asked him about the incidences, Wolf replied, “Americans are hungry for bold, positive, conservative solutions, not these vicious personal attacks.”

“I understand you don’t want to obsess on the personal,” Cuomo said, “especially when you have something that’s uncomfortable to discuss. Do you think that it is a little bit hypocritical of you when you’ve likened the president to Hitler in certain regards, and you’ve been biting in your attacks of [Senator Pat Roberts], to have it both ways and say, ‘They’re attacking me, I want to stick to policy,’ and yet you’re very personal in your campaigning against them?”

“These are the kind of issues voters care, and yet what the politicians want to do is have the campaigns about personality attacks,” Wolf said. “America cannot survive if we allow the career politicians to have these campaigns based purely on personal attacks.”