Daily Show Wants to Know Who Can Out-Conservative Lindsey Graham 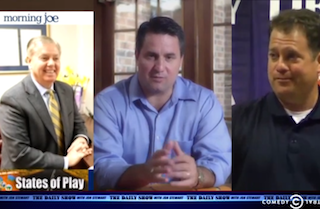 Sen. Lindsey Graham (R-SC) is up for reelection this year and, as evidenced by his fervent dedication to Benghazi, he will stop at nothing to prevent a dreaded primary challenge from the right. But that doesn’t mean there aren’t Republicans trying to unseat him, as The Daily Show’s newest correspondent Jordan Klepper found out last night.

According to candidate Bill Connor, “Lindsey Graham is not a true conservative.” As proof that he has what it takes to take on the sitting Senator, Connon cited endorsements from a tea party Facebook groups and the Grandparents Rights Association. But then of course there’s Lee Bright, who has the endorsement of Gun Owners of America and (possibly) the Great Opossum Society.

On the other hand, as one of Graham’s biggest supporters pointed out, Graham has a zero rating with the Human Rights Campaign, which fights LGBT rights, “in other words, he didn’t even try to help them on their agenda.” Graham also has a 92% rating from the NRA, but as one of Lee Bright’s supporters put it, “there’s a whole 8% left, that is dangerous.”

To settle things once and for all, Klepper played a game of “What’s in your pocket?” and did a series of Rorschach tests with the potential challengers to see who really has what it takes to unseat Graham.