Dem Rep. Argues Obama ‘Well Within His Right’ to Ignore Congress on Syria 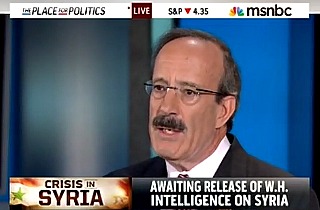 In an interview on MSNBC with anchor Thomas Roberts, Rep. Eliot Engel (D-NY) was asked to respond to audio of a number of Democratic leaders in Congress saying that President George W. Bush did not have the constitutional authority to attack Iran without the approval of Congress. Engel said that his reading of the War Powers Act suggests that President Barack Obama does not need authorization but merely needs to consult with members of Congress before striking Syria.

Roberts began by asking what the president told Engle, and other members of Congress, last night on a conference call regarding the situation in Syria. Engel replied that Obama himself was not on that call, but a number of his advisors said that they were certain chemical weapons were used by Bashar al-Assad’s forces.

“We have ample precedents of presidents taking action before consulting with Congress or getting Congress’ approval,” Engel asserted.

“The way ride the War Powers Act is the president can move and needs to consult carefully and closely with congress and congress has to vote within 60 days,” he added. “I don’t think what the president is talking about will last anywhere near 60 days.”

“I don’t think what the president is talking about will last anywhere near 60 days,” Engel continued. “And I think the president is well within his right, after informing congress and have robust discussions with Congress under the War Powers Act, to act on his own.”