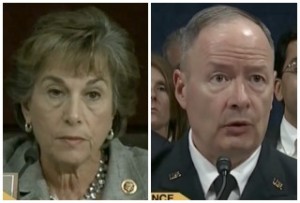 The term “patriot” gets bandied about a lot in the NSA debate. President Obama said months ago that Edward Snowden was no patriot. NSA head General Keith Alexander has been defending his employees as patriots as well, and during a Congressional hearing today, Democratic congresswoman Jan Schakowsky called him out for what he appeared to be implying about NSA opponents.

Schakowsky brought up how in closed-door meetings Alexander has been defending his employees at patriots, and while that might make him a decent boss, Schakowsky didn’t like the implication.

“Your robust support of your staff and your calling them ‘patriots’ I felt implied that someone was saying that the people who work for the NSA were impugned as not being patriots and not working hard. And I have to tell you that I have never heard that… A majority of the Congress actually voted to end the surveillance, and I am certain that you’re not talking about them as not patriots.”

She added that the authors of the PATRIOT Act, of all people, are the ones trying to reign it in. When Alexander began his response to her question, he made it clear he wasn’t suggesting anyone else is “less noble” and was simply standing up for his employees.

Schakowsky shot back, “But that implies, again, that they need to be stood up for!” And as far as she could see, they didn’t need that defending.

Watch the video below, via C-SPAN 3: