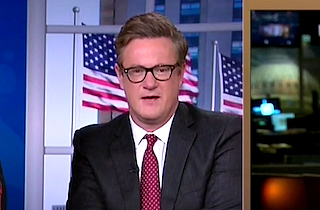 No, this is not Opposite Day (or maybe it is): the Democratic National Committee sent an open letter to the head of MSNBC, complaining about the network’s “confusing” policies on whether their pundits can fundraise for political candidates.

In a letter passed on to the Huffington Post, DNC spokesman Mo Elleithee questioned why Phil Griffin, the president of MSNBC, would allow Joe Scarborough to speak at a GOP fundraising dinner in New Hampshire, while axing Ed Schultz’s appearance at a Democratic fundraiser in Florida back in February.

“Now, I don’t begrudge Joe from speaking at this event,” he wrote. “But for the life of me, I couldn’t figure out why he would be allowed to speak at a Republican event, but other MSNBC personalities were not allowed to speak at Democratic events. Seems like a pretty big double standard.”

While Schultz cancelled his appearance at the Broward County Democrats Unity Dinner upon realizing it was a fundraising event, Scarborough was allowed to deliver the keynote address at the Cheshire County Republican Lincoln Day Dinner. Though it was originally described by the Huffington Post as a fundraising dinner, the organization said it would drop ticket prices from $50 to $25 to cover only the cost of the dinner itself.