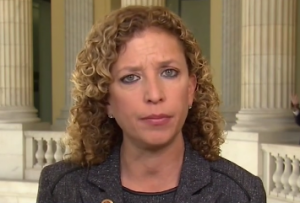 Congress got rather heated up today when Congressman Darrell Issa cut off the mic of colleague Elijah Cummings during a big IRS hearing, and during an appearance on Alex Wagner‘s MSNBC show, DNC Chair Debbie Wasserman-Schultz reacted by linking what Issa did in the hearing to nations like Venezuela and Ukraine cutting off “the rights of the oppressed.”

Wagner called the mess “election year hijinks.” Wasserman-Schultz said she was “stunned,” but was not surprised by Issa because of how he’s conducted himself thus far. And then she brought out this analogy.

“In the last couple of weeks, in which we have been, on both sides of the aisle, standing up for the rights of the oppressed, trying to make sure that in Venezuela that dictators there aren’t shutting down the opposition, the same thing in the Ukraine. At the same time, you have a chairman of the Government Oversight Committee literally electronically cutting off the mic of the opposition to prevent him from having any say or participation in the hearing that was focused on an investigation that has been resolved and that they are purely… proving that what they are doing here is just trying to continue to politicize this issue.”

She said that Issa and the GOP continue are continuing to “try to use politics to bludgeon this administration and silence any debate or opposition.”