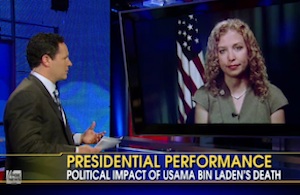 Last Monday, we all hoped that the death of Osama bin Laden would bring this fractured country together, that it would be a common good that reminded us that we were all American brothers and sisters, and that May 1st would join September 12th as a symbol for putting aside differences. Then we turned on the TV and radio and realized just how wrong we were. Sigh. But, wait, what’s that sound? Did I just hear someone call this a “week for unity?” And was that person newly elected chairperson of the DNC, Rep. Debbie Wasserman Schultz ? And was she on Fox News? And did she then compliment Fox News? And did Brian Kilmeade then compliment her?! Oh, my goodness. The Age of Aquarius has begun.

The groundbreaking moment of non-jerkiness occurred as the Congresswoman and Kilmeade discussed last night’s Republican debate and she gave her biggest kudos to the Fox News team that moderated it:

“WASSERMAN SCHULTZ: Well, I thought it was interesting that the Fox focus group’s reaction was that the person who was a business leader was the one that won the debate. Overall, I think you probably have Brett and Chris and Shannon and Juan who were the winners of that debate because they asked really tough questions, fair questions. I thought that the questions were thoughtful. The responses were really wanting in regards to the needs of the American people.

KILMEADE: Right, so Herman Cain really shined. All of them had their moments but, for the most part, they were very complimentary towards the President about the operation. Was that heartening?

WASSERMAN SCHULTZ: Well, I think this was a week for unity. This was a week in which all of us were incredibly pleased that, finally, we cut off the head of the snake. We ridded the world of the scourge of Osama bin Laden. We can’t take our eyes off the prize.