Donald Trump: I Don’t Know What The 13 Stripes Represent On The American Flag 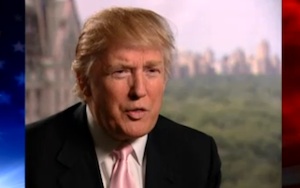 In Stephen Colbert‘s eyes, Donald Trump is nothing but a reclusive patriot who has the courage and generosity to erect a huge flagpole on his Californian golf course. But Rancho Palos Verdes Mayor Doug Stern claims Trump’s massive flagpole is against the law, which beautifully set-up a classic field piece in last night’s The Colbert Report. But while the segment featured lots of comedy jokes, it also included a soundbite that is sure to raise some eyebrows: Donald Trump doesn’t know what the 13 stripes on the American flag represent. (Gasp!)

In the past month or so, Donald Trump has been very publicly flirting with a run for President blah blah blah. But can someone who openly admits that he doesn’t know that the 13 stripes on the flag represent the original colonies ever be taken seriously. Has anyone really taken Trump seriously in his political campaign? (Alas the answer to that is yes, but less today than a few weeks ago.)

Because The Colbert Report considers itself a “fake news” program (like its progenitor The Daily Show) the producers and editors often take liberties with presenting soundbites out of context to help sell a joke (especially in these sorts of field pieces). So, there is a reasonable chance that Trump may have preceded his apparent admission of ignorance with a caveat. A Comedy Central spokesperson did not immediately return a request for comment to clarify.

Watch the very funny segment below, courtesy of Comedy Central. While I encourage you to watch the whole segment below, the money quote from Trump comes at the very end of the clip, or around 4:45.